I was coming out of a local shop. I came face to face with a man who was about to enter it.

I watched as his face crumpled and he mouthed

He turned on his heel and headed back to his car.

I was dumbfounded and tried to wrack my brains to figure out why I had had such a traumatic effect on him.

"Had I shifted him in the past and never returned his calls?"

"Was he an ex-pupil from way back in my early teaching days and I had thrown the glantóir at him?"

Nope. None of those scenarios rang a bell.

Then as I saw him striding back across the forecourt my worries were dispersed.

HE HAD MERELY FORGOTTEN HIS MASK AND ONLY REALISED IT WHEN HE SAW MINE. 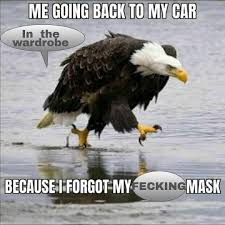