A teacher has to balance on a fine line between discussing the children's concerns about the ongoing coronavirus situation and not wanting to scare them unnecessarily.
When I overheard my class of 9 year olds talking about their "cool new game" -  CORONAVIRUS" I figured it was time to talk about it in class.
Basically it's a game of tag and when you're tagged you get the virus.Though kids will be kids. After all that's how we got the universal playground game Ring-a-ring-a Rosie, a reaction to the plague.

So I started the talk by asking what worries they had about the virus. In answering their questions I could try to allay their fears. All was going well until I said that the current virus was very much like the flu and could be restricted by hand washing and coughing into the crook of your arm not your hand.
One of my girls piped up.
"When you say it's the same as the flu, do you mean the normal flu or the Manflu? Cos when my dad gets the manflu, it's way worse than when my mum gets it!"

Must say I was floored by that question. The cynic in me wanted to reply
"Well, the coronavirus is probably midway between you mum's and your dad's flu."
BUT I DIDN'T ;)
at February 27, 2020 No comments: Links to this post 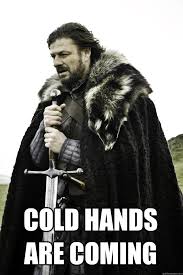 I'm concentrating on getting my mind, body and soul in order this Lent.
So I headed off for a run/walk after school. Nothing prepared me for how cold it was. My fingers nearly froze off.
They were so cold that when I got back to my house I couldn't turn the key to open the door. It took a few attempts to get in. Then I fumbled so much keying in the alarm code my alarm went off. Apologies to my neighbours for the disturbance.
I better invest in a new pair of gloves, even if it is nearly March.
Global warming me a*&£
at February 26, 2020 No comments: Links to this post

I have been having a bit of a hard time in the past few months, coping with things that have happened in my life. I've been working hard at getting back on track. I have to say that this book has been a great help, a no nonsense approach to getting your act together. I'd highly recommend it. 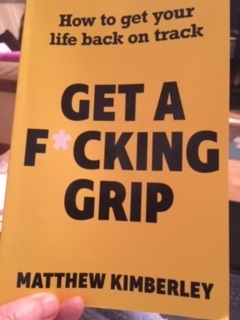 It's hard to believe that it's FOUR years since I did my first 5k run in Phoenix Park for Operation Transformation.
Fast forward to 2020 and I'm still making the annual return to the park for the run.
I was almost a no-show this year. On Friday night I was listening to the gales howling around my house and the rain  beating off the windows and I thought
"Noeleen, are you MAD? You're not thinking of driving all the way to Dublin in the morning to go for a run in THAT?"
And then a little voice in the back of my head said
"Well when you were on the show you didn't give a second thought to going for a run in the snow and jumping into Howth Harbour in the freezing cold to complete a challenge! What's a little bit of wind and rain to you?"

Luckily enough the weather was much improved in the morning and I headed to Dublin. And I'm so glad I did.
The sense of anticipation and nerves came back, just as vividly as they had four years previously. 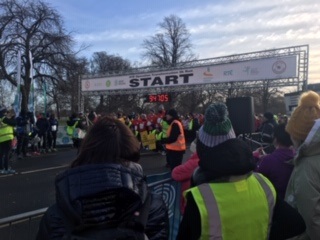 It was brilliant meeting up with lots of the crew and of course with my fellow leader Lucy. 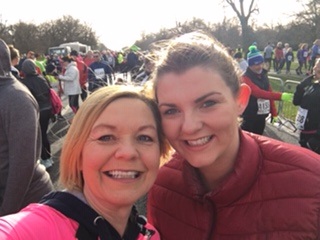 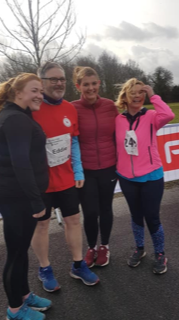 In a time when reality TV shows are getting a bad press ( and rightly so, in most cases) I can honestly say that taking part in Operation Transformation was the most positive thing I have ever done in my life and I'd do it again in a heartbeat.
IT'S YOUR MOVE!
at February 23, 2020 No comments: Links to this post 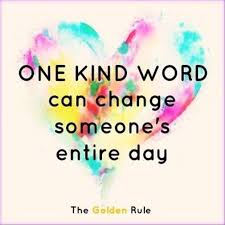 I have been in a state of shock since I heard the devastating news of the death of Caroline Flack. Did I know her personally? No. But I felt that I knew her.

And therein lies the root of the problem.

With the advent of media, and in particular, the recent phenomenon of social media, we have immediate access to the public and private lives of people in our “celebrity culture”.
In fact is there such a thing as a “private” life anymore?

I had a very minor brush with celebrityville in 2016 when I was a leader on Operation Transformation. Before the programme started we were given a talk on coping with being in the public eye. First bit of information was to make sure our social media accounts were private. Secondly, tell all our family and friends not to respond to any trolls, even if they were leaping to our defence. And thirdly, DON’T GOOGLE YOURSELF!

I immediately responded by changing my name on all my accounts into Irish. Years later I was doing research for my postgrad project on “Teachers on trial by Social Media”. I logged into one site that was to help people find their teacher on social media and the first piece of advice was
“Look up your teacher’s name in Irish.”

After Op  Tran was over I did look up news articles about our transformation. There were hundreds of comments congratulating me on my hard work and that it had paid off. There was one that said

I was devastated. I never looked myself up online again.
But guess what? THAT is the only comment that I remember and can quote, four years later.

So I can only imagine what it is like to be receiving a barrage of hateful, hurtful and downright disgusting comments every day. How would any of us survive that?
And before you make the argument
“Well why put yourself in the public eye? Then you’re fair game.”
NO! YOU’RE NOT.
Everyone has a right to keep their public persona and their private life separate.

Neither am I saying that anyone can just do what they want. But if someone has an affair, cheats on their partner etc. then it is up to their family and friends to deal with it. If a person breaks the law then it is up to a court, judge or jury to decided on blame and consequences. It is NOT up to the media or keyboard warriors to take on the role of judge, jury and executioner.

And this doesn’t just apply to celebrities.
Every teacher can vouch for this. At our parent-teacher meetings, you might have 29 parents who are positive and 1 who slates you. Guess which one keeps you awake that night.
I’m not saying you haven’t a right to critise something that you feel is unfair or unjust. But there is a big difference between a constructive criticism and an insult.
And that applies to all walks of life.

So two things that I hope to take from this devastating event.
1)      Realise that everyone is fighting their own inner battle with life. Be kind.
2)      Tell people you love and appreciate them NOW. And that they’re doing a great job and winning at life.
Love ye all!

Life is a Battle 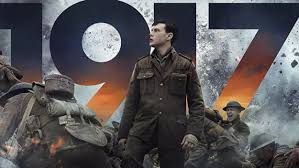 I was wondering if it would live up to its Oscar nominations and boy, it did! It was one of those films that you get so involved in, that you are exhausted by the end of it. I crossed No-man's land, dodged the bullets and raced through the trenches with Lance Corporal Schofield. 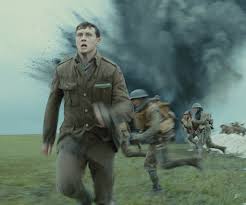 The last film that made me feel like that was "Speed" when I drove that dam bus with Sandra Bullock.

Feeling very nervy and jumpy when it ended, Helen and I made it to the cinema door only to be shocked once more.
There was a downpour of swirling rain outside.
"What the....?" I thought. "Storm Ciara isn't due until tomorrow".
So still in war zone mentality I took off across the car park, dodging flying leaves, branches, litter and on coming cars.
I felt relieved when I made it safely across the front line of the car park to my car.
I took a moment to catch my breath before I set off on the next stage of my mission. I turned the ignition key and headed into the driving rain.
The first hurdle was the motorway. The main danger came from the gobsh*tes who were still speeding past and splashing up water onto an already drenched windscreen.
Then I turned off to navigate the county roads towards Raharney. I spent the journey peering into the overhanging trees, not for snipers but for falling branches.
Finally I turned into my driveway. I heaved a sigh of relief. I had succeeded in my mission - to make it safely home.
I think I deserved a medal for that even if a medal is
"just a piece of tin with a ribbon attached."
at February 08, 2020 No comments: Links to this post

'Twas the night before the Oscars

There was a feeling of excitement and anticipation in the parish. No, it had nothing to do with the imminent approach of Brexit at 11pm.
It was because it was the eve of A NIGHT AT THE OSCARS, a joint fundraiser for Killucan GAA, Killucan Ladies Football Club, Raharney Camogie Club and Raharney Hurling Club. 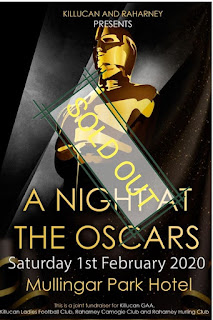 It involves various groups of locals filming a 10 minute version of well known films and programmes to be shown at  an awards ceremony. I am thrilled to have been involved in Derry Girls. 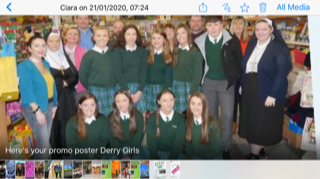 The smell of false tan was wafting over the parish. There wasn't a tin of hairspray....or even a ticket, to be got for love or money. A desperate appeal for one such ticket went out from a distraught husband who had gotten one for everyone in his family.....but had forgotten his wife! Thankfully I could come to the rescue to save his marriage/life!!!

I was under pressure as I had last minute bits and pieces to be done. One such job was to leave my hair into my hairdressers.
What?????? I hear you ask. 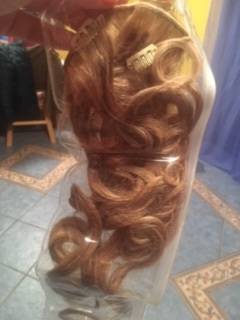 Yep, I can leave my hair extensions into my fabulous hairdresser Ger, the night before, and I go back the next day and she works her magic with my pre-curled hair, thus saving me precious time. She had asked me to send on a picture of the look I was going for.
Unfortunately, even she decided that this was a step too far! 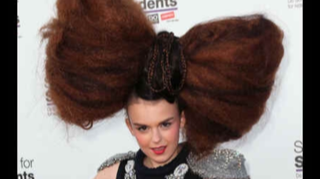 While I was there I dropped the bombshell that I was on my way to my dressmakers for my final fitting. There were gasps of disbelief from the assembled ladies, who were also in mid Oscars preparation.
"Are you mad leaving it so late to collect? What if it's not right? What will you do?"
"Relax", I said. "I have absolute confidence in Nicole, my miracle dressmaker. It'll  be fabulous1"

So tune in tomorrow to see the end result! 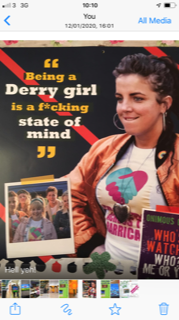