Key to my heart

Up and out of bed at stupid o'clock this morning to go to the Phoenix Park for this year's Operation Transformation 2019. It's hard to believe that it has been three years since I completed my first 5k run.
When I parked up my car, I could feel the knots and butterflies in my stomach. Why, I don't know, as there was no pressure or camera on me this time. I checked that I had my race number and phone and headed off for the starting line.
There was a festival atmosphere about the place and I was thrilled to meet up with lots of the crew that had worked on our series.
I completed the 5k.......in what time, I am not saying!
So after I had spoken to loads of people, I headed off on the 1k walk through the park back to where my car was parked.
I was lost in my thoughts and memories as I approached my car. I put my hand in my pockets to get out my car key, rummaged around and found.....NOTHING! I searched again but to no avail. My heart sank to my boots, I mean runners. The enormity of my situation hit me. My key must have fallen out as I was running. And here I was, stuck in Dublin with no way of getting home. I contemplated retracing my steps, but I knew that it was futile. I had covered kilometers of the largest city park in Europe, so it was definitely like looking for a needle in a proverbial haystack.
I don't know why, but I continued to the car. As I did so, I prayed to God, St Anthony, Dad and any other saint I could think of, asking that I'd find my key.
I looked in through my car window and saw this.... 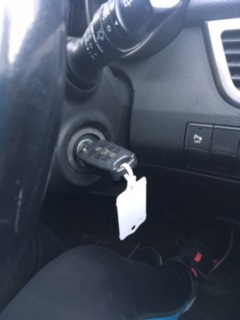 My car key was still in the ignition!!! I had been so preoccupied with the run, I had just left the car and walked away. But not only that, I had left my purse, money, credit cards and house keys in it too, for safe keeping! I stood looking at it in disbelief for a few moments before I even opened the door.
I can't believe that a car with the key on the ignition was still there after three hours. Dublin hasn't gone to the dogs completely after all.
Or maybe the would-be thief took one look at the key and thought that the car must be  a crock of sh1t and the owner wanted it stolen, so they didn't touch it!
Whatever the reason, thank you God, St Anthony and Dad for getting me home today.