Not so full of hot air.

I'm about to declutter my house and was wondering what to do with all my clutter. I decided to see what a car boot sale entails so I went to Clara market on Sunday morning on a reconnaissance mission.
While I was there I spotted some huge football/beach balls. I decided to get two for Megan and Evelyn, my (grand) nieces.
I loaded them up in the car ( the footballs, not the girls!) and headed for home.I was about  two miles down the road when I heard Phssssss!
"Where's that noise coming from?" I panicked.
I checked if the back windows were a bit open. That's alarmed me before. Nope, they were fine.
"Don't tell me I have a puncture!" I wailed, trying to remember where the jack was.
The noise was getting louder and closer.
I turned around, nearly swerving into the ditch, to realise that one of the feckin' balls was after self combusting in the heat.
Panic 1 was over and Panic 2 set in. Now I had only one football and as our family knows, there's one of the two girls who sometimes doesn't do sharing!!!
Thankfully the size of the ball made up for the lost one and a happy game of football commenced in the garden.

This is what the red ball SHOULD have looked like! 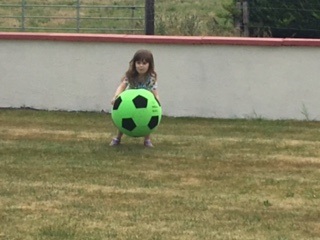 And this is how it ended up. 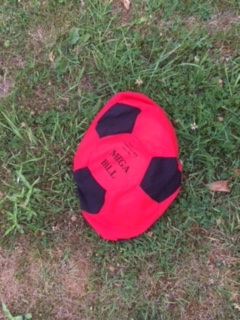 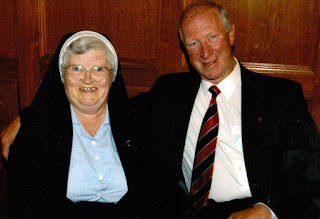