A very important decision to make 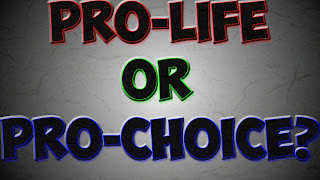 The date for the referendum on repealing the 8th amendment to our constitution is drawing nearer. At the moment all abortion is illegal in Ireland. This is not to say it doesn't happen. We either export it to clinics in Britain or we import it online by means of pills.  Now our country will decide whether abortions up to the age of 12 weeks will be allowed to be carried out here or not.

Seeing as it is such an emotive issue, it is not a clear cut black and white scenario, there are many shades of grey. I would lean more strongly towards one side of the argument than the other, but I still have reservations. I would worry about it being used as a means of contraception, but on the other hand how do we show empathy and support towards women who are pregnant as a result of rape, who are putting their own lives at risk if the pregnancy goes ahead or when the baby, due to a severe foetal abnormality, will either die in the womb or immediately after birth. Should society decide that they must go ahead with such a pregnancy until Nature takes its course? So I am one of the many "not exactly sure yet" electorate.
So with that in mind, I sat down last night to watch "The Late Late Show" which was having the first of several debates between the ProChoice and the ProLife sides of the argument.

I was very adamant that I was listening to both sides with an open mind. Firstly I was very impressed with how well conducted both sides were, especially seeing as how emotional the issue involved is. I thought the Prochoice side were very clinical in their arguments while the Prolife side tugged on the heartstrings.
As the debate neared its conclusion I have to admit that I was getting very irritated by the repeated argument of the Prolife side. It was, that if women have a choice, they will rush into abortion and live to regret their decision. When questioned about rape cases that result in a pregnancy the response was that it was very unfortunate, but that the women would come to love their babies. What I took from this argument was that women would not make the right decision so choice should not be given to them, instead society would make that decision in order to save themselves from themselves.

When the programme was over I changed channels and was delighted to find that the second season of "The Handmaid's Tale" was starting. Pure fantasy and escapism from the real world. Halfway through it, it suddenly dawned on me.
Yes, this is a sensationalised piece of drama. But if you strip all that away you get to the underlying theme...
Women have no place in decision making in society. Their worth is only measured by their ability to carry a child to full term. They have no choice in whether they want to have a baby or not. It is for the good of society so they must go along with the law. Society knows better than they do.

Not so much fantasy after all.