Rules are made to be broken

One of my summer rules is to not spend more than an hour watching television on fine summer evenings. So why was that on my first official day's holiday I was plonked on my couch, unable to move, for 4 hours 47 mins? Well it was because of this man. 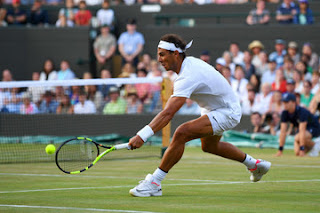 Anyone who knows anything about me, knows that I have always been a HUGE Nadal fan.Not only is he one of the greatest tennis player, nay sportsperson of all times, he also is the epitome of sportsmanship both on and off the court.
Two years ago it was widely believed that his sports career was over. He was plagued by injury and withdrew from the circuit. If he had retired there and then everyone would have understood and applauded his amazing career.
But his hunger for the game was still there and he came back this year bigger and better.
Who can forget that historic final against Federrer in The Australian Open in January.Then he had his unrivaled TENTH win at the French Open last month.
He returned to Wimbledon this year in the best form of his career. It was thought that he could go the whole way again.
My hopes were dashed today when he went two sets down against Muller. But he fought back to win the next two sets to bring it to the deciding one. As there is no tie break in a final set neither of them could break the others serve for a mammoth 37 games. Nadal saved four match points. However he couldn't save the fifth and so bowed out of the tournament after 4 hours 47 minutes.
Ever gracious, even in defeat he stopped to sign autographs as he left centre court. 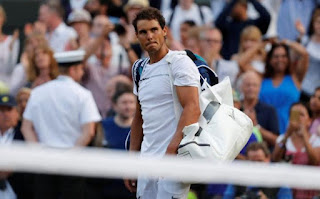 He's still my hero!
And because of him I missed out on my dinner and my cycle today!
Ah well, tomorrow is another day!
at July 10, 2017