I TAWT I TAW A PUDDY TAT!

I HATE BIRDS!
It's no secret that I freak out anytime there is one of their species in my vicinity. I am terrified of their beady little eyes, their sharp beaks and their talon like claws.
And yes, that description applies to "cute" little robins too!
I could never wear anything with feathers on it, hell, I can't wear anything with even a PRINT of a bird on it.
I would be quite happy if they were wiped off the face of this planet, though I guess that would feck up the food chain, big time!
Every summer since I've moved into my house there has been an occupied nest in the corner of my garden. I allow this new family to hatch out and grow up, on condition that they don't come anywhere near my house and promptly move out once they've learned to fly.
So why is it, that despite this burning hatred for them, have I been spending the last few days chasing away my neighbours cats from my garden?
It appears the fledglings are ready to fly the nest and the cats have set up a stakeout relay in the hope of pouncing on a slow learner! 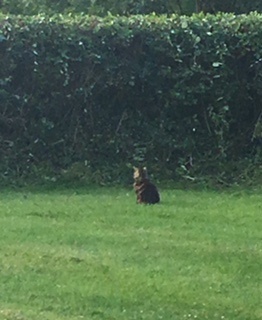 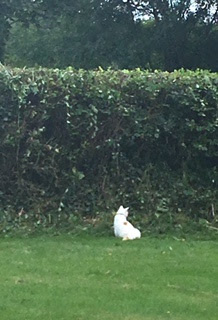 Okay, so I want all birds to disappear but I don't want them to do so in the jaws of an already fat predator.
Is that a paradox or an oxymoron???
So every ten minutes or so I've had to go out to run away the cats. Though technically, seeing as the white one only has three legs, it hopped away rather than ran!
at July 12, 2017