When Operation Transformation season 10 started in January I was really jealous that I wasn't in it this year.Trying to console myself I reflected
"Well look on the bright side. At least you'll never have to do another fire brigade challenge!"
Then I got asked the question
"Would you like to come back and do a fire brigade challenge against the current leaders?"
"Of course I would!" I jumped at the chance.

I was delighted to meet up with my partners-in-crime, Clare and Lucy along with Siobhán and Mark from two years ago. 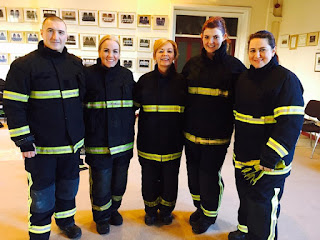 As the current leaders were not to know who they were up against, so we were spirited into the Training centre and hidden away until they were ready for us. we had a bit of time to kill. I think I lost my calling as a chief fire officer. 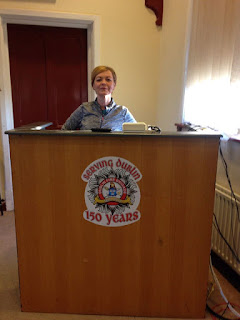 Soon we were called out onto the training ground. A quick face off against the leaders and then it was ACTION!
In the next 20 minutes we jumped from a two storied building, zip lined to a fire truck., loaded it with 10 fire hoses and 20 extinguishers, PULLED the truck to the fire engine, unload it, rolled out three fire hoses and then put out a fire. PHEW. We were neck and neck until.......DISASTER. We got to the fire only to be told we'd left the nozzle back in the fire engine. By the time we ran back to get it the others had turned on their hose and we were defeated. 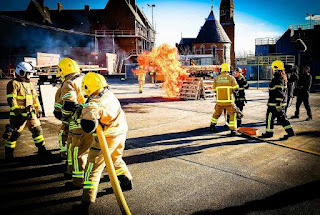 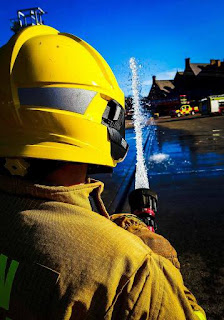 Of course we would have loved to have won but if we had to lose, then it couldn't have been to a nicer bunch of people. 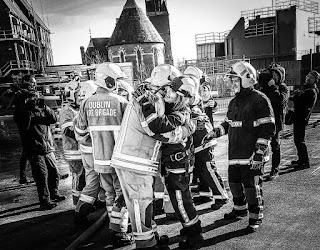 Afterwards we had our lunch together. We were very conscious of the fact that we were eating baked potatoes and suchlike, but they were on their salads. But it didn't phase them. 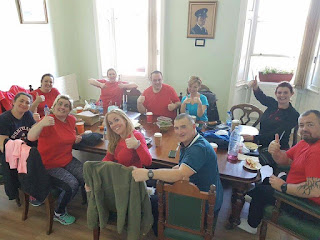 I'm the rebel in blue!
Signs on it. They all had great weight losses this week. Well done lads!
at February 10, 2017