What makes a successful woman?

I was delighted and surprised to be asked by Midlands Radio 3 to take part in an interview about Successful Women in 2016. I met up with the other women, all very inspiring and motivating. We had a great auld laugh.

Afterwards, seeing as I was in Tullamore, I met up with my cousin Janette. We have over a century of shared experiences between us. As the saying goes
Cousins are your first friends. 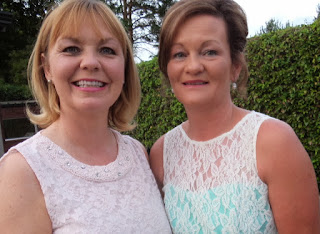 It was only as we were talking, it dawned on me that it was really Janette that they should have interviewed. It's just over a year since her 19 year old son was killed in a tragic farming accident. In January she set up and ran an Operation Transformation group in her local GAA club which had over 80 followers. She said today that she has very little memory of that time as she was running on autopilot. However, being involved in something like that gave her a reason for getting up in the morning.
http://www.nols-agirlforallseasons.com/2015/10/adam-mangan-1996-2015.html

It's a year down the line and things are still very raw and difficult. But Janette has kept going through good days and bad days,
She said today that she admires me for what I have done this year, but in all honesty it is nothing compared to what she has done.
All I can say is
We definitely have a touch of Granny Keena's spirit in us!
http://www.nols-agirlforallseasons.com/2010/08/jane-keena-rip.html