Showtime was fast approaching.
I haven't been on stage for a good few years and have gotten rusty. So I was delighted and panicked to be asked to take part in Battle of the Sync Stars for The Downs Ladies football club.  The next two months were spent rehearsing my dancing and miming!
Having mimed my way through about twenty musicals I felt that this was my moment!
My battle song was that classic Let it Go from Frozen!!!
I was channeling my inner Disney princess.
The week of the show I felt ready. All I had to do was collect my costume. I was told that it would be ready on Tuesday.
I rang the costume shop that morning.
"No sorry its not here yet. Ring tomorrow."
Slight panic but there were still three days to go before showtime.
I rang again on Wednesday afternoon with fingers crossed.
There was a slight hesitation on the phone and then I was told
"Yes, its just in the wash. It'll be ready in an hour",
Phew, I hadn't even realised that I had been holding my breath.

When I entered the shop, my newly washed costume was waiting for me. Happy days. The man behind the counter started to grin and said
"There was a bit of drama connected to that costume!"

It seems that the Gardai had hired a range of costumes at the weekend. All costumes were returned on Wednesday EXCEPT FOR MY ELSA DRESS!
The manager had rung them and stated that the costume was needed URGENTLY.
It was then promptly delivered to the door........in a squad car. 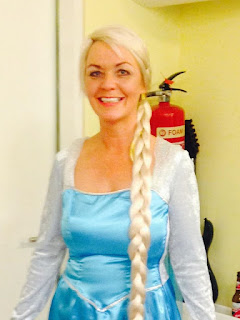 Proper order. I'm sure it happens for Beyonce all the time.
Diva? Who me???