In 2003 Julie and I headed to Dubai for the Dubai Open Tennis tournament.
It's not that we flew over from Ireland for it. We were living in Abu Dhabi at the time and it was just an hour up the road!
As was typical of the Arabs, they organised a world class tournament, paid the top tennis players a fortune to take part, but unfortunately overlooked one little detail. The locals had little interest in tennis and the ex-pat population was very limited. It was being beamed out all over the world, so it wouldn't look good for them if the stadium was empty. So one of the Sheikhs bought all the tickets....and gave them out for free!
Happy days.
I always find it strange that the games of tennis and cricket that need fine weather to be played, were developed in England that has almost as much rain as we have! No fear of it being "rained off" in Dubai. 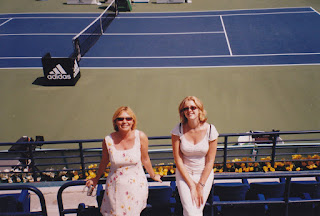 Despite the fact that tickets were free, the place was still practically empty! 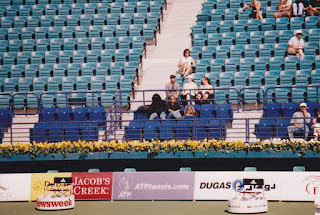 The last player on court was Roger Federer, hence the grainy picture. Imagine what we'd pay today to see him. 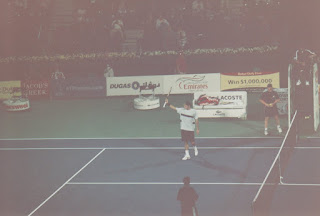 Thirteen years have quickly passed by. Julie and I are still attending sporting events but perhaps in not as glamorous a setting. We both took part in the Great Dublin Bike Ride this year. This time I had to photobomb to be let in the shot with herself and her Dad! 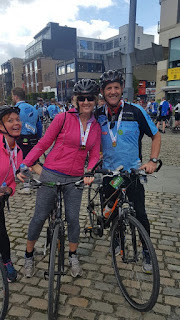 We had the principal of a local Secondary school in to talk to the senior pupils about choosing a school for next year. He led a very interesting discussion with my class about all the new and interesting things they would experience in their next step in education.
He then asked them what they thought would be the best part of Secondary School.
"Lockers!"
"Metalwork"
"Accountancy".

One eager fella had his hand up.
"Yes. What do you think is the best thing about school?"
Without batting an eyelid he said
"Hometime." 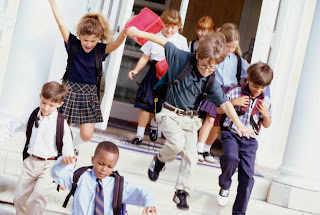 Given that I am writing this on Friday afternoon after they have all gone home I cannot disagree with him!
at September 23, 2016 2 comments:

A Wake Up Call 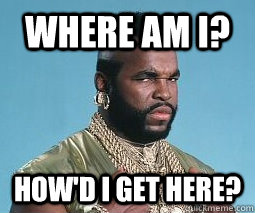 My alarm started to thrill and I slowly opened my eyes. I squinted at the phone screen. What I saw made me do a double take. My phone calmly told me
You can be home in 57 mins.
As I looked around the room at my familiar walls, curtains, lampshade and duvet I thought
SO, WHERE THE F*%$  AM I ?????

I wasn't hopeful.
Friday's weather was terrible, wind and rain. Saturday was warm and dry but Sunday was promised rain. Not very helpful for my first 60k bike ride!
When Cycle Ireland had approached me at the start of the summer and asked me to be their ambassador I jumped at the chance. After all I had loads of time to train. Summer came and went. Yes, I did get on my bike and had several 30k under my belt, but that was no where near the full mileage.
I slowly came to my senses at the ungodly hour of 5 am. Before I even opened my eyes I listened for the sound of rain on the roof. Nothing! That was a good sign. Before long I had loaded my bike on the back of the car and off I sped into the darkness. 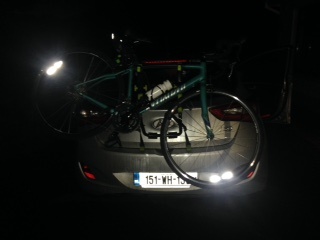 Being a real culchie my major concern was not the bike ride...but parking! The gods were on my side I got free parking right beside the starting line.
Soon the sun came out and it was ready for off. Panic time again. They wanted photos of me on the starting line but I had visions of the 5099 other cyclists behind me taking off at high speed and Id be run over! Thankfully we were split up into 100k and 60k cyclists and I didn't start until Wave 3! 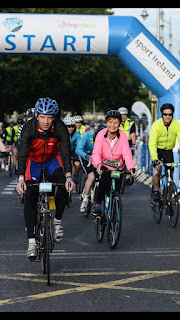 The first 30k went by without a hitch. The roads were closed for us and we coasted along the coast road! I have never seen Dublin looking so well. The stage was made even easier as I met up with fellow cyclist Laura and together we talked our way to the first stop in Swords. 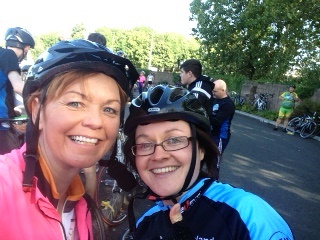 After a fix of sandwiches, banana and energy bar we were on the way again. However we had been lulled into a false sense of security. I'm talking HILLS! We puffed our way up the inclines and then freewheeled down. But our exhilaration was short lived as we knew another hill was in our sights!

Eventually we arrived at the next stop in Santry.I was never so thankful to see another banana stall in my life. We thought we had done 15k but it turned out that it was really 20k!!! I don't think I've been so excited since the Christmas that Santy brought me a Sindy doll! And even better, we were told it was nearly all downhill.
That gave us renewed energy and off we sped. And yes it was downhill but one negative was that this time we had to stop at the traffic lights. Have you any idea how hard it is to keep restarting when your legs just want to fold?
But suddenly we turned the corner into Smithfield, did a lap of honour and it was all over.
I had done it!
Every now and again I do a double take when I realise how far I have come in the past nine months. I thought I was fit but now I realise that I was fooling myself with my thrice weekly strolls.Now I have my first 5k run, 10k run/walk and now a 60k bike ride under my belt. I feel fitter and healthier than when I was in my 30's, which is probably because I AM fitter now than I was then.
This medal is as precious to me as an Olympic one! 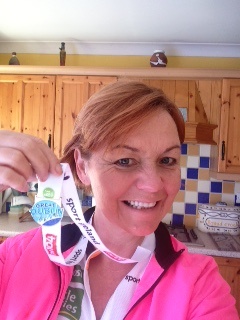