During the week I got a call from Cycling Ireland to ask me if I would be interested in doing the Great Dublin Bike Ride on September 11th. I quickly pointed out that I have not cycled since my primary school days....which was during the last century. They assured me that this was not a problem, in fact I am the type of person they are trying to get involved. They have a training programme that will bring you from 0 to 60km in 8 weeks. Or as they like to call it "Sofa to Saddle". Seeing as only last week I had said that I would like to get involved in cycling as it would add to my running and swimming so of course I said "YES!"
If you had told me this time last year that any sporting organisation would ask me to partake, never mind be an ambassador for their sporting event, I would have split my sides laughing!

I went up to Smithfield for the launch. The other attendees included our new Minister for Sport. Maybe its a sign that I'm getting old, but seriously he looks 12! I was nearly going to set him some homework!

Anyway, we all put on our GDBR jackets and held up the sign. As I looked around I suddenly had a "moment". I was decked out in the Dublin colours.

Now normally this wouldn't be a major problem but this weekend Westmeath take on Dublin in the Leinster Football Final. I realised that if I was spotted in the colours of the opposition I might just be run out of the county!!!
All I can say is
"I promise I'll be wearing my maroon and white on Sunday, when it really matters! 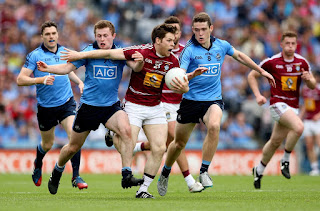