Last week I was contacted by Sports Ireland asking me to be their ambassador for the Great Dublin Bike Ride 2016.
The idea that ANY sporting organisation would even want me to join them, let alone represent them still flummoxes me!

On Sept 11th up to 5000 cyclists will set off from Smithfield to complete either a 60k or a 100k ride. Obviously the longer route is for the experienced cyclists ie NOT ME! The shorter one is to encourage the beginner and anyone who has a bike gathering dust in their shed to take them out and get active. If I can do it, anyone can!  Go to http://greatdublinbikeride.ie/ to register and get your training programme.

I went to the launch on July 14th. The initial photos were easy, just stand around holding a sign. 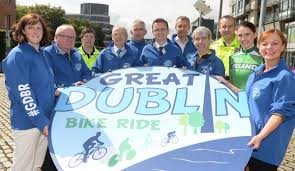 I can do that!

But then the photographer wanted a shot of us actually on a bike. That was no problem for Caroline Ryan who is a professional cyclist, but I explained that I haven't been on a bike since primary school.....which wasn't today or yesterday. Hey, it wasn't even during this century.

As I set off down the cobblestones to the end of the Square one of the organisers came with me. She was terrified I was going to fall. But it was like riding a bike....you never forget!!! 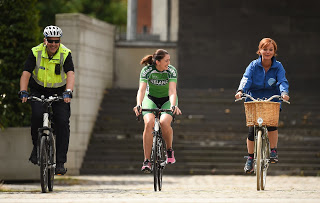 As you can see I look perfectly relaxed :)
I do think the Garda escort was a bit over the top!

I'm glad they didn't see this photo taken the last time I was on a bike. They would never have let me take part! 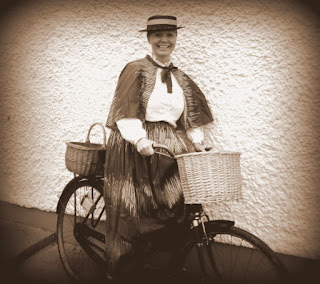