The true power of sport

Two events happened recently that made me re-evaluate the importance of sport in our lives.
I made the trip to Monagea  Co.Limerick  to take part in a 10k walk.  Anyone who watched Operation Transformation couldn’t help but be both moved and inspired by Clare O’Donovan’s heart breaking story. On December 12th 2011 she went up to her son Darra’s bedroom to call him for school. What awaited her was something that no parent should ever have to face. Darra had died in his sleep of Sudden Adult Death syndrome. He was just 15 years old. He was an all-rounder at sport. He excelled at hurling and football and reached county level in both sports. In Clare’s own words
“His smile could melt your heart”.

At times like this people feel at a loss as to what to say, but then again, actions speak louder than words. The local community of Monagea came together to organise an event in memory of Darra O’Donovan and Niamh Herlihy, a young 20 year old from the area who had also died of SAD just four months before Darra. Every May Bank holiday weekend they hold a 10km walk/run as well as a 125km endurance cycle in aid of C.R.Y (Cardiac Risk in the Young).
When I arrived the local hall was thronged with people registering for the walk/run. 300 cyclists had already departed at 9 am. There was a legion of women pouring tea and coffee while the tables were straining under the weight of sandwiches and homemade cakes and buns. Little did I ever think that I would be involved in warming up a crowd of people for a run, but I found myself on a trailer with my partners in crime Lucy and Clare, doing Jumping Jacks.
When Clare stood in front of the crowd to give her thank you speech, there wasn’t a dry eye in the parish. She was so appreciative of the support that her family had received but I’m sure she wished to be there for any other reason. 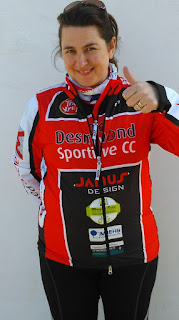 Last October my own family was touched by this grief when my cousin Jannette’s son Adam Mangan was killed in a tragic farming accident in Offaly. He had certainly packed a lot of living into his short nineteen years of life. Much has been said of his sporting ability. He played for the Offaly minor football teams in 2013 and 2014, Tullamore rugby club and also represented Leinster and Ireland.
I can still hear Jannette proudly tell us

"My son is playing rugby for Ireland".

Adam’s GAA club St. Vincent's claimed their third successive victory over Edenderry recently and Jannette and her family were on hand to take part in the celebrations. Another of her sons, Cathal was on the winning team. 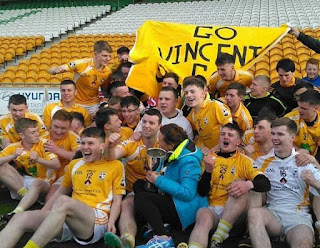 For both families it must have been an extremely difficult day. They would have given anything to have had their sons with them. But the support and love that they received from their communities helped to dull their pain, if only a little bit.

And that I think is the real prize of belonging to a sporting community, far richer than world records and gold medals.
at May 05, 2016