Saturday morning, Bank holiday weekend, saw me up at 6.45 am.
What's that all about, I hear you ask!!!
Well, I was heading down to Monagea, Co. Limerick to take part in a 10k walk/run.
As I didn't get to train properly for the past two weeks, I was banking on more walking than running.
Anyone who watched Operation Transformation couldn't help but be moved and inspired by Clare's story. Her 15 year old son Darra went to bed one normal night, but died of Sudden Adult Death while in his sleep. Clare's honesty in sharing her story with the nation was both hearth breaking and inspiring in equal measure.
The local community of Monagea hold an annual walk/run/cycle event every May bank holiday weekend in order to raise much needed funds for C.R.Y Cardiac Risk in the Young, and also to raise awareness of this condition.
And that was why I typed Monagea into my Sat Nav and set off!

2hrs and 40 mins later I knew I was nearing my destination as the road was dotted with
Road Race taking place today.
I was very chuffed with myself as anyone who knows me, knows that I have zero sense of direction.
As I was approaching civilisation, lady in Sat Nav announced
In 100 metres turn left.
"Wha? I said to myself "That doesn't seem right".
But being the obedient type I turned left. I went down a little bóithrín for about half a mile when  Ms.Sat Nav proudly announced
"You have reached your destination!"
As I looked around at high hedges, open fields and two sheep, I replied.
"I have in me a*&@"

After maneuvering a 72 point turn as there was no space, I headed back the way I came, asked the first person I met and was soon entering Monagea. The atmosphere was electric. It is at times like this that you appreciate the support of small local communities with big hearts. You had to beat your way into the local hall to register, always a good sign. 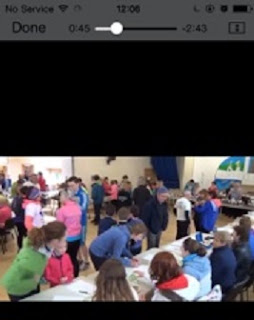 It was fabulous to meet up with some of my OT family, Clare, Lucy and Dave, fire officer.
I must admit I get a little shiver of fear when I see him as I immediately think I must be doing something wrong and look around me for a fire hose to roll up!!! 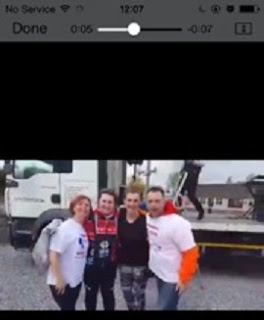 One of the most surreal moments was being up on the trailer with the girls, leading the warm up. ME!!! Doing a warm up.Who'd have thought??? 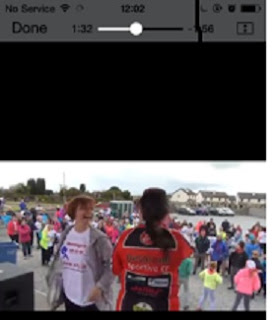 I'd say Karl Henry is quaking in his boots as he fears I will take over his title of Ireland's most famous fitness guru!

And off we set. Due to a couple of reasons I haven't been training for the past two weeks, so I walked/ran as best I could. I was a bit disappointed that I couldn't have ran more, but on the plus side I got a great look into everyones house and garden as I passed by and got loads of ideas!!!
Everyone made in back in one piece, just in time for more tea and sandwiches.
They must have gone through a mountain of sliced pans.

Later in the evening I headed over to Clare and Tom's house. It was so strange walking into their kitchen. I'd never been there before but I felt as if I had because I was so used to seeing it on the TV. I could nearly have gone straight to the right press to get the cups out!
I had to get my photo taken with these mini celebrities. 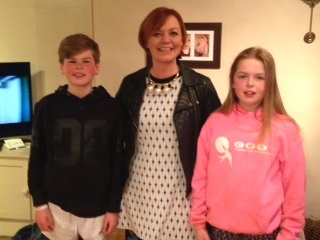 Then off to the local pub for a bit of socialising! It was a very small pub, not much bigger than my kitchen, but somehow they managed to fit in the whole parish!
Had a fabulous night. They even managed to coax me into singing a verse of The Westmeath Bachelor!
I'm looking forward to next year already, when I will
a) run the whole thing
b) know the second verse of The Westmeath Bachelor.

I am so proud and privileged to be friends with this amazing woman, an inspiration to us all. 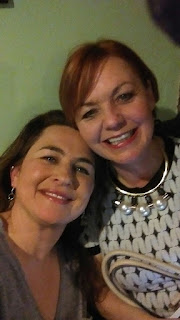