Walk in my footsteps 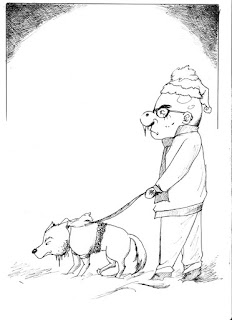 In October one of Raharney's oldest citizens, Larry Byrne passed away in his 95th year.
Larry lived just down the road from me. He has to have been the most active nonagenarian that I have ever known, not that I have encountered too many of them. No matter what time of the day or night I was driving down the road I would meet Larry. He was either walking one dog, or two, pushing a bike or actually cycling it. I'd meet him on my way to school in the morning, on my way home in the afternoon, on my way to Leixlip in the evening or on the way back at night.
I'd say to myself
"There's Larry again. He's never off the road."
It's only now I realise that he was probably saying the same about me!

I remember a few years ago there was an unfortunate accident on our road when a light aircraft crashed into a field. The road was closed off. I went walking towards the village but was stopped by some officials. They warned me that they could let me through but they were must stricter at the other end  and I probably wouldn't get back. They told me this story in order to horrify me.

"An old man of 90 went through here on his bike and they wouldn't let him back. The poor man had to cycle home by KINNEGAD!" Shock horror.

And I really was shocked. I knew that trip wouldn't have knocked a fonk outta Larry as he did it several times a week, whereas it would have killed me if I attempted it!

Larry passed away peacefully in his sleep last month. I still slow down going around corners on my road "in case Larry in on the other side".

Last week I was talking to one of my neighbours and of course the conversation came around to my upcoming stint on Operation Transformation. One of my challenges is to do a 5k run, so lots of training will be done.
"Do you know what?", he said "You'll be our road's new Larry Byrne!"

If I can live as long and healthy as Larry did and then at 95 snuggle up in my bed one night and pass away peacefully, I would count myself very lucky.
Ár dheis De ar a anam.
at November 30, 2015