During Maths class with my 9 years olds, we were faced with the following problem. 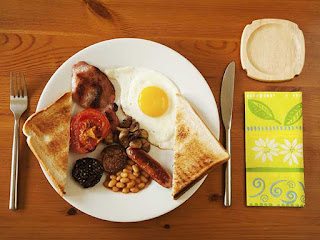 Before we could solve the problem, I had to make sure they knew what "a full Irish" meant. I explained that it was a breakfast that had typically Irish food. I asked them for examples and I got the obvious
"Sausages" "Rashers" " Black and white Pudding" "Eggs" "Tomatoes".
Then I got the answers "Waffles" and "Hash browns". I explained that these were more American type foods than Irish.
One of the little girl's eyes lit up and she announced.
"I've got another typical Irish food.......GUINNESS!"

I suppose it has been consumed for breakfast on manys an occasion!
at November 04, 2015