It has been a week since the tragic accident that took Adam's life and it still doesn't make any sense.
Adam was my cousin's son and one of the nicest young men that I have ever met.

He certainly packed a lot of living into his short nineteen years of life. Much has been said of his sporting ability. He played for the Offaly minor football teams in 2013 and 2014, Tullamore rugby club and also represented Leinster and Ireland. I can still hear Jeanette tell us
"My son is playing rugby for Ireland". 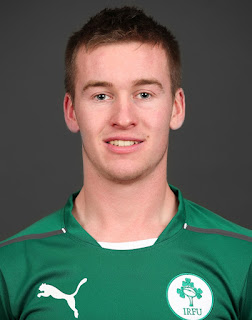 What Irish mother wouldn't burst with pride to be able to say that?

To see his teammates stand shoulder to shoulder around Adam's grave last Wednesday would break anyone's heart. The 2000+ congregation who gathered in and outside the cemetery sang "Ireland's Call" as a tribute to a young star who was not permitted to reach his full potential. I, for one, will not be able to listen to the opening anthems of Ireland's remaining games in the  rugby World Cup as it will be too painful a reminder.

From listening to and reading the tributes that have been pouring in, it is obvious that this was only one aspect that made Adam such a wonderful human being. Phrases such as "cheeky grin" "always smiling" "helping hand" "made my world a better place" abound in bucketfuls.

Adam was training to be a teacher. From my many years of experience in this area I can honestly say that he would have been a fantastic teacher and enriched even more lives than he already has.

Last weekend Adam was home from college. He had given his Mam a voucher for dinner in her favourite restaurant for her birthday and in typical Adam fashion had told her and his Dad that he would drive them into Tullamore and more importantly collect them later. He then went off to help his neighbours on their farm. A split second  meant that he would not return.

No one deserves to die in tragic circumstances but I believe that some people deserve it less than others. I know its dreadfully wrong of me, but when I think that last weekend there were young fellas of Adam's age who went out doing drugs, drinking and driving, starting fights, mugging old people for extra cash yet they survived the weekend unscratched and will probably go out and do it again this weekend , I get very angry.
I suppose that's one reason I could never be a god, I don't understand their reasoning.

But anger doesn't solve anything. There are no right words to say to comfort his family, as it was such a wrong thing to happen. I did find this anonymous poem as I went in search of something that would make any sense of this situation. It's the only thing that gave me the teeniest, tiniest sliver of comfort.

Do not judge a biography by its length,
Nor by the number of pages in it.
Judge it by the richness of it’s contents

Sometimes those unfinished are among the most poignant

Sometimes those unfinished are among the most beautiful

And when something has enriched your life
And when it’s melody lingers on in your heart
Is it unfinished?
Or is it endless?