Football is not a matter of life and death, it's more important than that!

Today was Cemetery Sunday, a day when the whole parish assembles to remember our deceased loved ones.
I always think of Abu Dhabi when this day comes around as I usually arrived home for my summer holidays on this weekend and this was a brilliant opportunity to meet up with all my friends. When I told friends from other cultures about meeting up with my friends in the graveyard they were both amused and horrified in equal measure. They were totally gobsmacked when I recounted the story of the year that the village was robbed because everyone was up in the cemetery!
We now have a garda presence on this Sunday.

It's not that we are obsessed with Death. Rather it is because of a huge respect for the dead. Death is seen as an inevitable part of life. Children are not shielded from it  but rather are exposed to it in a natural and non threatening way. This should help them to deal with death when they encounter it in the future. 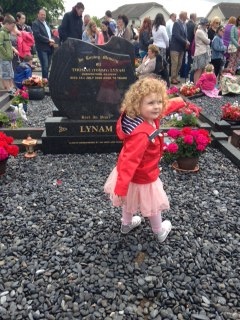 Megan rearranges the ornaments on her great granddad's grave.

This year numbers were down a bit. This was because Westmeath (our county football team) were playing in the Leinster football semifinal in Croke Park. Not only was this the first time they reached this stage since 2004 but they were playing  their old enemies Meath, who they had failed to beat in their last 22 encounters in the Championship. The odds were stacked against us.

So it was that a large number of the congregation in the graveyard were wishing they were at the match. However thanks to modern technology they were. As I looked around the graveyard I could see that at least two people in each family were looking down at their phone following the game.  Things were not looking good. Westmeath were 9 points down with 20 minutes to go. Then began the comeback of the century. Slowly but surely we began to claw our way back. In between every "Hail Mary" you could see fists being clenched behind headstones as another point was scored. I would say that every prayer that was said around a grave was aimed at the team and not for the dearly departed.
But I know for a fact that Dad would prefer my prayers today were for a victory rather than for him.

And guess what?
It worked!
There was an audible sign of relief around the graveyard when the final whistle was blown up in Croke Park and Westmeath emerged the winners, only 131 years in the waiting! 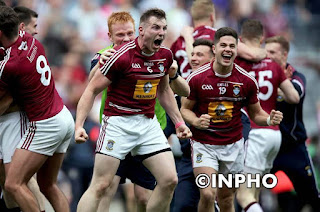 The priest finished the ceremony with the words
"It would appear that today God is from Westmeath!"
Someone beside the priest was obviously on their phone as well!

This is an example  of how excited we got.......
http://www.joe.ie/sport/video-this-irish-dads-reaction-to-westmeath-result-is-just-priceless/501551