May the odds be ever in your favour.

I was looking at the folklore story of the giant Fionn MacCumhaill with my class of eight year olds. Poor Fionn was in an awful dilemma. Despite the fact that he was very handsome
his own words....
he could not find a wife. 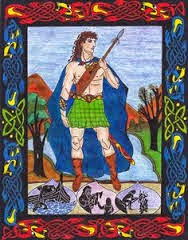 I asked my class if they could think of any reason why he couldn't get himself a wife. They all agreed that it was probably because he was a giant and trampled on any woman he was near!
I was going to ask them if they meant physically or metaphorically, but I figured that was a bit too cynical for eight year olds!!

I then asked them
"Lads, if you were looking for a wife, where would you start?"
One hand shot up
"Miss, I'd go to Johnstown House."
A local hotel.
"Why is that?"
"Because Dad says there must be fifty women to every man there!"

Well you can't argue with those figures!