Uncle Maurice was our favourite uncle.
Technically speaking, as he was Dad’s only brother and Mam had no brothers at all, he was our one and only uncle but I strongly suspect that even if we had had ten uncles, Maurice would still have been the favourite.
As children we walked the mile and a half to our local primary school in Raharney. On rainy days which are very common in Ireland Uncle Maurice would be waiting outside to bring us home. This was back in the day when no one was brought home from school! But he didn’t bring only us. The Andersons and the McKeoghs, who lived up our road, also clambered into the car and off we went, all ten of us.Now in this day of Health and Safety he would probably be arrested but nothing ever happened to us and we all got home safe and dry….and in one piece.
During those long hazy days of our childhood summers we were either shipped off to Granny and Granda Keena’s house in Milltownpass or to Granny and Granda Lynam’s farm on the far side of Raharney. Granny Keena’s house was on the main road from Dublin to Galway so we were never allowed outside the gate in case we got killed! In Granny Lynam’s we had the freedom to roam the fields, explore haybarns and to milk cows. Guess which place we always wanted to go!
My most vivid memory of that time is when I was about five years old. Uncle Maurice brought me to the shed to see a new born calf. He showed me that if I held out my hand the calf would try to suckle it. Very timidly I did. I can still feel the sandpaper texture of the calf’s tongue rasping on my hand.

Uncle Maurice is the reason I hate turnips!
When I was about ten I was “helping him” around the farm. He told me to get something out of the turnip and mangle shed. I was no sooner in the shed when I heard the bolt slid across from outside and Maurice give a guffaw of laughter. He had locked me in. I’d say I was in there for about 30 seconds but it felt like an hour. The smell of turnip was so overpowering that to this day when I smell them I get a flashback to that moment and I can’t eat them.
I still don’t know what a mangle is but if I ever come across one I’m sure I’ll hate it too!!!
Once again in this modern day of political correctness I’m sure Maurice would be arrested. But even after this incident I followed him adoringly around the farmyard like a puppy.

Uncle Maurice had a wicked sense of humour. Many years ago before there was a dry cleaners in Raharney, oh wait a minute, there still isn’t one, people would leave their laundry into Weir’s shop where it would be collected, cleaned and left back. Lynam’s farm was next door to the Dufficy’s. One day Maurice went into the shop to buy a few groceries.
“Is that auld Dufficy’s coat hanging up there?” he asked Noel Weir.
“Tis indeed.”
Maurice bought his half pound of ham and slipped a slice into the pocket of Kevin Dufficy’s coat.
A week later he went to visit the Dufficys. Betty was wandering around the kitchen sniffing frantically to try to find out where the pong was coming from. Maurice pointed to the newly cleaned coat that was hanging on the back of the door.
“I’d say the smell is coming from that. Sure they don’t send them away to be cleaned at all. Noel Weir just sprays a sup of water on them and charges you for the cleaning!”
When Betty eventually discovered the truth she chased him out of the house with the sweeping brush shouting
“Ya little fecker ya, Maurice Lynam. Don’t ever come back here again!”
Maurice continued to visit them weekly until their deaths a few years ago. He was devastated when they passed away.
Uncle Maurice had his first heart triple bypass when he was 47. He had at least one more, maybe two, we lost count as he was in and out of hospital so many times in the intervening years. He always made a miraculous recovery. He used to say it was due to prayer, we’d say it was down to pure stubbornness!
I would always introduce him as
“This is my rich uncle Maurice with the bad heart. Can I get you anything Maurice…a chair?....a cup of tea? …….a pen?.......a solicitor?
He’d sit down give a little cough, hold his chest and reply
“Well maybe a slice of apple tart?”
“Of course Uncle Maurice!  Anything you want……and don’t forget me in your will!”
It may sound irreverent but you know the way you only cut the boots out from people you love!

Maurice had a fierce sweet tooth. After every stint in hospital he would be back in Weir’s shop. It is now being run by Declan, Noel’s son.
“How did you get on in hospital Maurice?”
“Oh they told me I have to up me chocolate!”
Every week Declan would smuggle him a few bars of his favourite chocolate as Angela, Maurice’s wife was obviously trying to keep him as healthy as possible. Impossible!

When the economic crash happened in 2008, Maurice was as worried as the rest of us. He was in our house one day, giving out.
“Them banks are useless. You’d be as well off putting your money under the mattress.”
“But Maurice,” I replied innocently, “If you put all your money under the mattress, you’ll burn your arse off the lightbulb!”
I did think I’d killed him there and then, as he went into a hoop laughing.

Uncle Maurice hasn’t been well since Christmas. He was getting weaker and his eyesight was failing. It seemed more serious this time than all the previous times when he got sick.

Wisdom is knowing when to fight your battles and when to surrender.

Maurice fought the battle of his life to get to last Saturday. It was his only child Fionnuala’s wedding day. On that morning we were all getting ready in his house. I was there as I was driving the bridesmaids. Maurice sat in his chair in the corner, as the beautician and hairdresser were working their magic on us. He tried his damdest to join in.
“Is there any sign of that white cow and a calf?” he asked.
I looked out the window at the herd of cattle.
“Well I can see a very fat white cow…but there’s no sign of a calf!”
“She’s overdue. You’d better be ready.”
“Sure thing. I’ll just go and get some clean towels and boil the water!”
“Don’t forget the washing up liquid.”
“Eugh”, I shivered in disgust. “I don’t want to know what the washing up liquid is used for!”

Later that morning I was putting in his button hole. 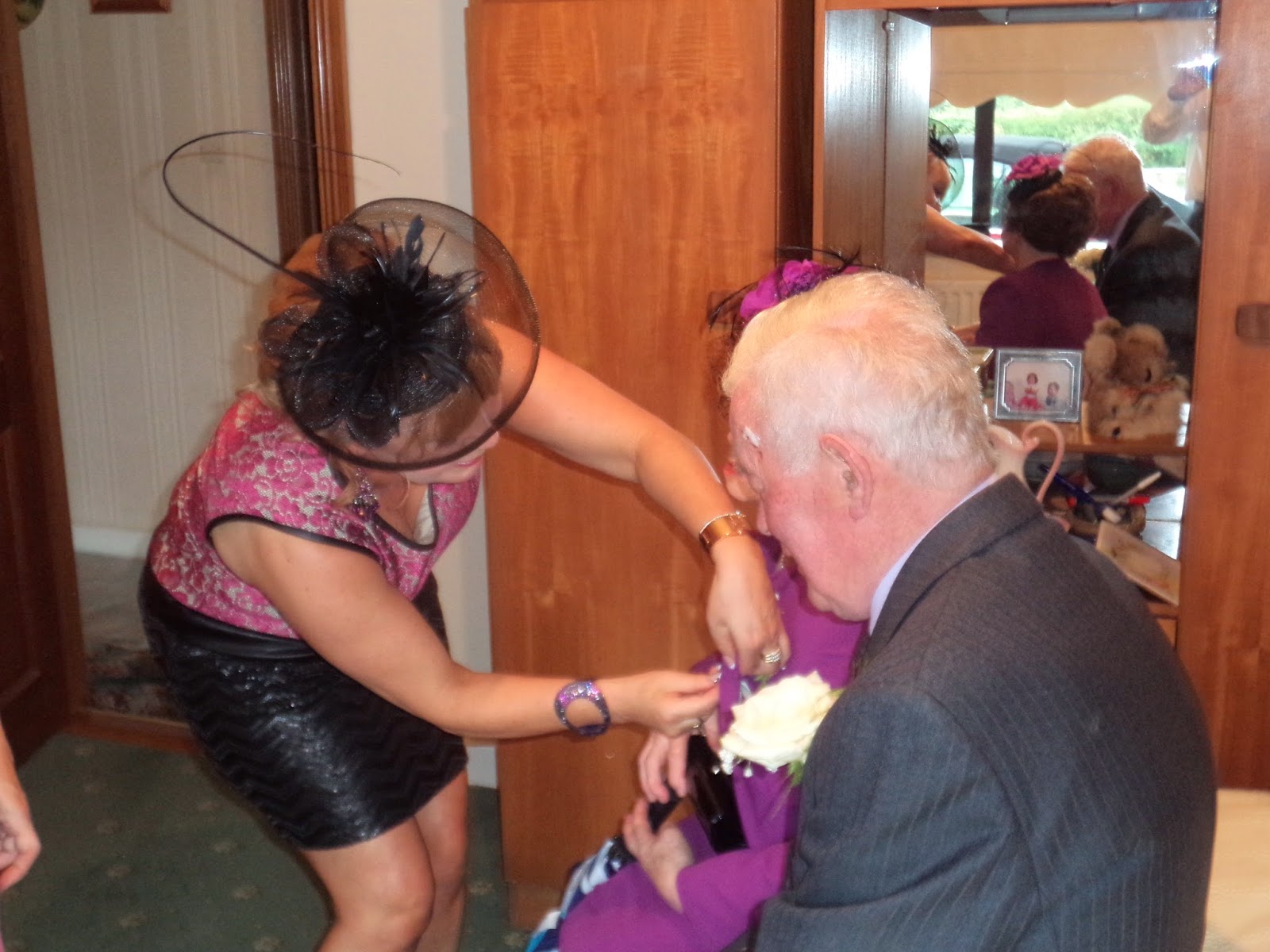 “I think you’ve lost weight Noeleen.”
“You can’t see properly, can you Maurice?”
“Not a stem!” he replied.
“ Because if you could, you wouldn’t say that!”
“I was just trying to say something nice.”
And that’s when I knew he really was sick. We never said anything “nice” to each otherc!

Maurice won his battle and he walked Fionnuala down the aisle. 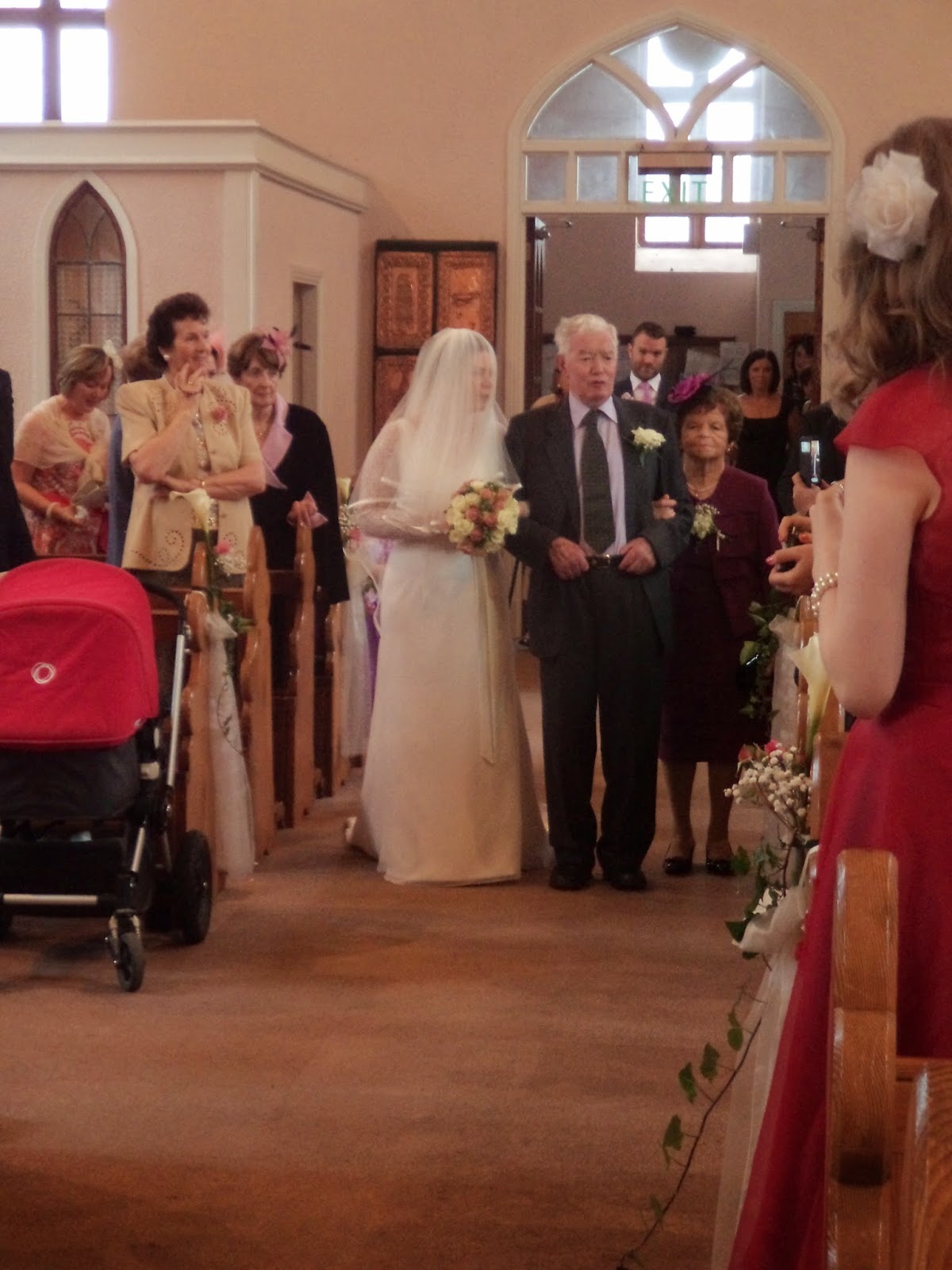 He gave up the battle and surrendered early on Thursday morning when he passed away.  He was waked in his house.
Just for my non Irish readers, a wake is where the open coffin and corpse is in the house and friends and neighbours come in to pay their last respects.
As he was saying goodbye, Declan Weir slipped a bar of chocolate into the coffin beside Maurice. He figured that as he had been doing that for years he’d do it for Maurice’s final journey.

We are all devastated. It was expected but death is always a shock when it happens. We do get some comfort from the fact that Maurice is now with Dad in heaven. Dad was a man of few words so I’d say their meeting went something like this.
“Howaya?”
“Grand. Yourself?”
“Fine.”
“Any news?”
“Not much. Sure ya know yourself.”
And then they’ll sit side by side, not saying anything, just like they used to do each side of the fireplace in the kitchen.
But it’s a comfortable silence. 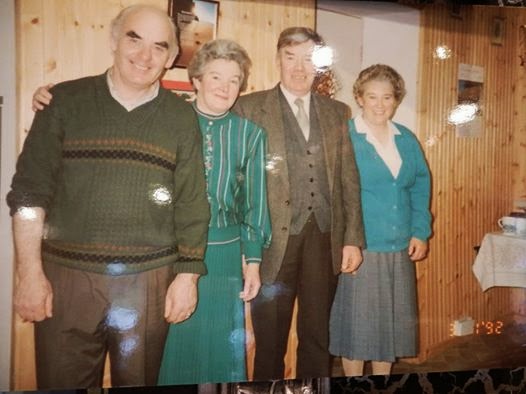 We love and miss you both very much.