Friends on mine went on holiday with their seven year old daughter. While there, they met up with another couple who also had a seven year old girl and the two became good friends. Both families came from Belfast, so when they returned home the girls kept in contact.
When the other girl's birthday came around, their daughter was invited to her party. As Dad is a stay-at -home-dad, he is the one who gets landed with all the parties. He said that he would stay for the duration of it as his daughter didn't know any of the other guests.

As the other family belonged to a different ethnic group, everyone was greeting with big hugs and kisses. Being a typical reserved Irish man, Dad could not cope with this at all! He decided to retreat to the garden where there was a big Bouncy Castle and slide. He figured that he would stand there on duty until all the hugging was over and then he could break the ice.

Over the top of the slide came a young boy with the biggest afro hairstyle he had ever seen....apart from the young fella in Diversity! 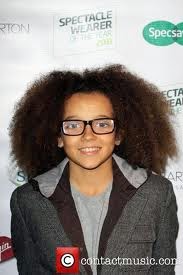 The young lad slid down and landed SPLAT on the mat at the end. Suddenly there was a wail, and Dad realised that he hadn't gotten up. When he looked over, the child was flailing his arms and legs all around the place but seemed unable to stand up.
Dad's first thoughts were
"Shit. He's after breaking his neck or his spine or something!"
He looked towards the house, but all other adults were in the kitchen, oblivious to what was happening. He ran over to the young lad, horrified at what he might find. He looked closely and discovered that the young fella couldn't move because.....
HIS HAIR WAS STUCK TO THE VELCRO ON THE SIDE OF THE BOUNCY CASTLE!
Relieved, Dad tried to pull the hair off it. The young fella started to scream even louder at which point the adults did hear him and came rushing out! They were met by the sight of a strange man tugging and pulling at a young boy. Beetroot in colour, he hastily tried to explain, showing the tufts of hair that were in his hands. Luckily they all saw the funny side of it and laughed it off.
Dad made his escape as soon as he could!