Daisy is legend!
A few years ago Marese had to bring her to the vet as she was acting EXTREMELY strangely. The vet diagnosed that she was experiencing a phantom pregnancy and so put her on Valium!
Marese was going to ask for a prescription for herself!
Recently she ( Daisy, not Marese) has been diagnosed with diabeties. Marese has to administer a daily insulin injection.
Finian has recommended a different type of injection for her, but she's still here.
Yesterday I was up in their house when Niall came rushing down from the sitting room in a panic.
"Mam," he wailed. "One of the dogs is after eating my spaghetti bolognaise!"
"WHAT!" replied Marese. "I hope it wasn't Daisy or she'll go into a diabetic coma!"

The two dogs were brought in and interrogated.  Daisy tried to plead her innocence but we had our doubts! 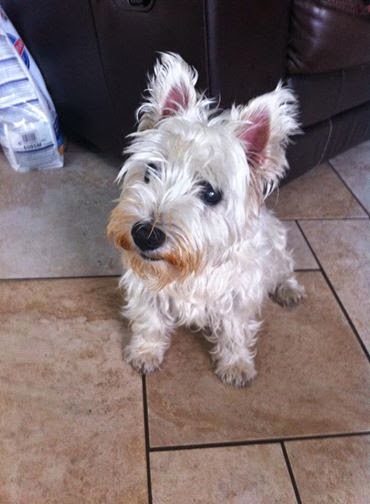 "Me? I never even saw the spaghetti bolognaise. It was Ruby!"