Why I'd never make a good Buddhist. 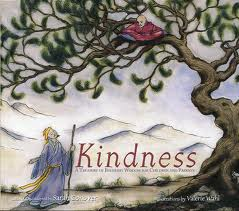 I was sitting on the sofa the other evening, kindly minding my own business, when suddenly a shadow sweeping across the room frightened the bejaysus out of me. I looked up to see a huge wasp flitting around the lightbulb.
"What on earth are you doing here? You're all supposed to be dead at this time of year?"
I watched it for a moment and realised that it was very doddery and was probably on its last legs/wings.
Now a teacher's first instinct is to swat and kill any wasps that she sees. It cuts down on the screams and roars of her pupils in the classroom and also any potential stingings and subsequent insurance claims.
However I was feeling very relaxed and kind and so I channelled my inner Buddhist.
You shall not hurt another living creature, not even a fly.
I decided that it wasn't long for this world anyway and was about to pop its clogs of natural causes any moment now.
I headed off to the bathroom to run myself a nice bubble-filled tub.
I was just about to step into it when I felt something brushing my shoulder. I looked down to see the feckin' huge wasp crawling all over me. I froze for a minute, afraid to startle it and be stung. Then with a flick of my wrist I swished it off and it landed into the frothy waters of the bath. It struggled for a moment, little legs flailing around and then it went still.
Now I've seen enough scary movies to never trust a seemingly dead body in a bathtub. Nine times out of ten, it will rise up out of the waters and continue to wreck havoc.
So I got a wad of toilet paper, scooped up the corpse and flushed it down the toilet. It is currently on its way to the Irish Sea.
All that trauma would have been avoided if I had killed it the first time, like any decent Christian would have!
at January 03, 2014