I am not one for speed. Myself and Roxy have travelled the length and breath of the country and have only clocked up a total of 2 speeding points. We should have received another two but I managed to cajole, weep, "bat my eyelids" way out of them.
I have never been a major fan of Formula 1 racing. All that whizzing around and around a track does nothing for me.
Is Michael Schumacher still racing???
But when I got an opportunity to go on a Pit Lane walk around Yas Marine Circuit before the Abu Dhabi Formula 1 race this weekend I jumped at the chance. In truth I felt very guilty as I know there are people ie my brother John who are fanatics and would have given anything to have been given the opportunity. Not knowing what was impressive I took photos of everything that looked vaguely important. 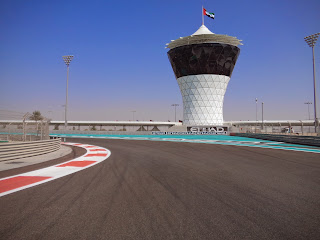 What's that vroom-vroom sound I hear in the distance? 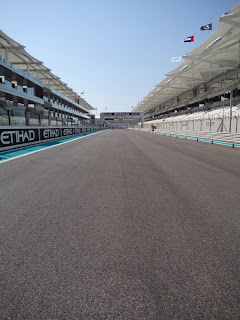 Even myself and Roxy would let rip down that straight!

I then headed into the pit lane where all the garages are. As I've said I had no idea who was who so I took photos of them all. I won't bore you with them now
There's nothing worse than having to sit through someone else's holiday snaps. Yawn!
But here was one that even I recognised. 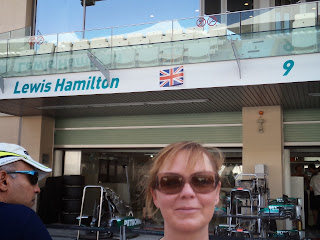 Me doing my best merkat impression.

I know nothing about cars but I didn't think this looked too good! 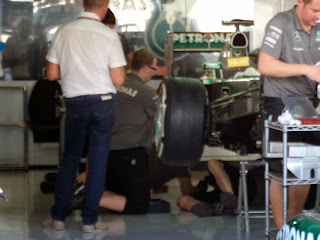 Hey lads get the finger out. The race is tomorrow.

I now know that this one is important. I learned something this weekend! 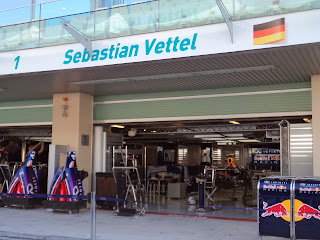 I went wandering around to see what else I could espy. I was passing a stand that had a car on it. A man beckoned me over.
Ever since my days as a facilitator for Drama in-service for teachers I have become a serial volunteer. I know what it's like to be standing in front of a group of people, with a great activity to do, but it falling flat on its face if no one partakes. So every time someone asks for a participant, I feel their pain and I put up my hand!
I presumed that I was there to get my photo taken. Then I was handed a pair of goggles, gloves and a huge pneumatic drill.
Well, I suppose it makes for a better photo opportunity. 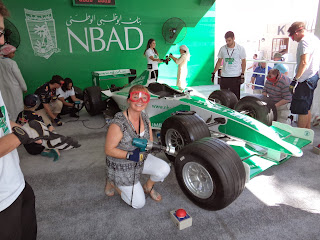 But when a guy came over and started to show me how to use the darn thing I began to panic.
You mean I have to change the wheel????? Every time Roxy's tyre looks a bit soft I play the helpless female and get my brother to change it! And what about that fateful morning when we actually got a flat wheel on the way to school, I had to get the principal of  a nearby school to change it for me.
http://www.nols-agirlforallseasons.com/2012/12/thanks-for-present-roxy.html
But he was having none of it. I was soon pumping away....and the wheel was changed. Just lets say Lewis would NOT have hired me for his team!
I was standing up, very proud with my accomplished task, when the man said,
"NO! Stay there. We start timing you now!"
What????
I looked around and saw that there was a man at each of the other wheels. It was a competition. The spectators started cheering and clapping. Now I am very competitive....so there was no going back!
Ready, steady, go!
The winner did it in 12.6 sec. I came a respectable second with 13.4 sec. I don't think Finian will ever change my tyre again!

Later on I was still searching for items of interest. I saw a group of people gathered around so I raced over to see what all the fuss was about. At last! Someone I knew! 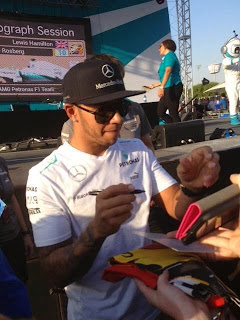 Hey Lewis. I don't mean to alarm you or anything. But if I were you I'd get back to the garage. Your car is in sh*** 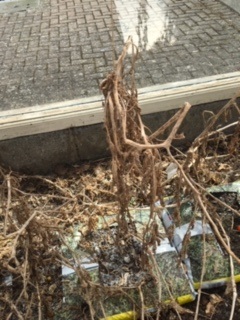