We decided that we needed a little holiday from our holiday, so we hired a car and headed off down the southern coast of Turkey. I'm afraid I had begun to take the beauty of this place for granted, but every so often we would turn a corner and see another sight to take our breath away. 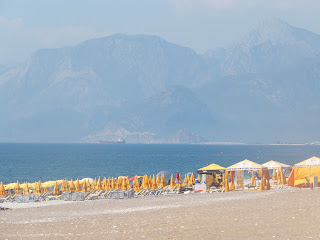 It was about two hours into our journey that we saw a sight that made us shriek with excitement and cause us to grind to a halt on the side of the road.
It was a McDonalds!!! After three weeks of eating nothing but freshly grown produce it was a godsend to be able to eat the processed stuff! 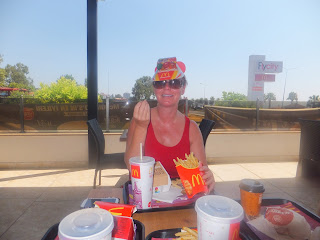 The landscape changed dramatically as we headed inland and upland. 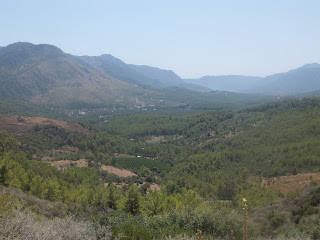 It was then that the hair raising stuff began. There was an hour of corkscrew roads right on the edge of the mountains. There's nothing like a sheer drop to the right of you, mere inches from the car, to get the adrenalin flowing
and when the kamikaze goat jumped out in front of us, it wasn't the only thing that was nearly flowing!
Many heart stopping moments later we reached our first destination, Olympos. Its a little haven set in a valley, the mecca for backpackers. Accommodation mainly consists of huts, many of them built on stilts or in the trees. After our journey it was time to pick a tree and relax. 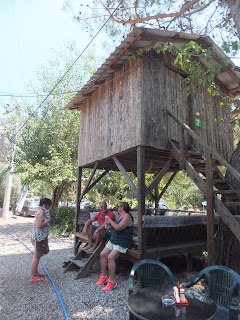 We put our feet up. 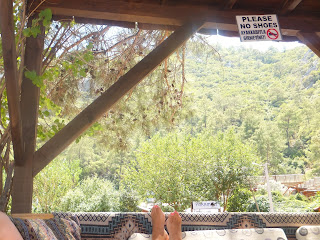 But I'm not wearing any shoes!
A little snooze later and we reassessed the situation. Beautiful and relaxing as the place was, we decided that we'd never manage to climb the tree to get to bed later on in the night, and also we wanted a pool to cool down in. So we headed two minutes down the road to Hotel 212. It is run by a beautiful Belgian lady. It consists of individual "houses" set in the mountain side. We decided on the villa. After climbing the 70 steps with our luggage to get to it, we thought that maybe we should have stuck with the tree! 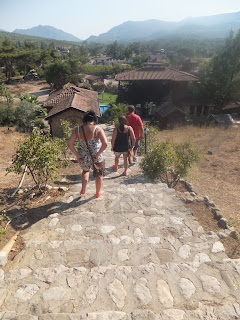 But in the words of Mylie Cyrus, it was well worth "The Climb"! It reminded me of the house in The Swiss Family Robinson. 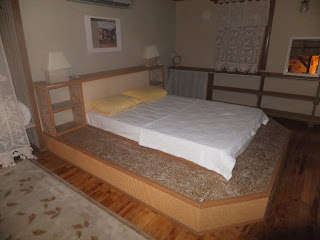 The more adventurous, less weary of us headed back into Olympos for a night of debauchery!
Early the next morning, well actually not that early, we had a brunch of salad from the garden and eggs from the hens that were milling around us.
Nightmare for the bird-phobics among us!
It was the tastiest lunch I ever had, and definitely undid the damage done by the McDonalds!
Off we set on the road again, this time heading for Kekova. It is a beautiful fishing village. 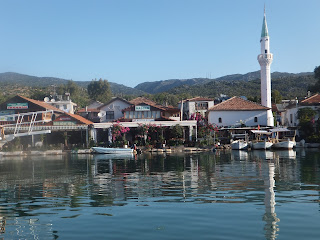 2500 years ago , as the result of an earthquake the ancient city of Kekova sank beneath the sea. You can now take a boat trip to see these underwater ruins. But what we didn't bank on was that music was prohibited in the area in case the vibrations would damage the ruins, so there were no late night bars!!!
So after a peaceful and early night
which did us no harm whatsoever
we were up at 7 o clock the next morning for our boat trip!
It was pure bliss. In the clearest water that I have ever seen I tried my hand at snorkelling for the first time. 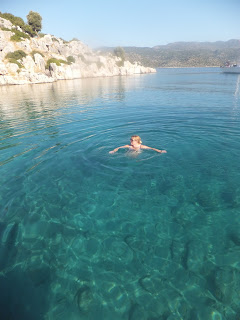 Swimming with the fish in among the ancient ruins, I felt like Jacques Cousteau!

On the way to shore I had a Titanic moment, well I mean you'd have to! 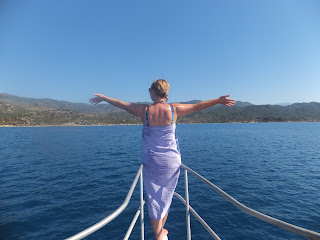 After more sight seeing along the coast we returned to Mahmutlar, weary but enlightened by our travels.
We'll have more of that please!
at August 07, 2013