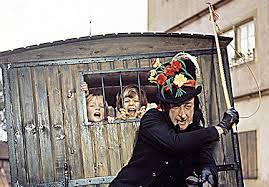 I was visiting my best friend Genevieve, catching up on what we have been up to over the summer. Her 10 year old daughter, Sadhbh also had her friend over on a play date.
The two girls came into the kitchen, moaning.
"Mam, we've nothing to do . We're bored."
This is despite the fact that the house is better stocked than Toys-R-Us, with every conceivable toy and gadget known to children.
I put on my best "teacher" voice.
"Tell me girls, what class are you going into this year?"
"Fifth", they said warily.
"Brilliant! I teach fifth class. If you go and sit at the dining room table I'll get some paper and pens and I'll start to teach you Long Division. You'll have a head start on the rest of your class."
The girls' faces dropped. They looked at each other in dismay. Her friend looked quizzically at Sadhbh as if to say
"You know her. Is she capable of doing it?"
Sadhbh responded
"Yes she is mad enough. RUN!"
They ran out, screaming.
I grabbed a sheet of paper and a pen and ran after them. The next ten minutes were spent with me chasing them around the garden, waving the paper and shouting
"STOP! Long Division is great fun!"
I returned to the kitchen, worn out. And do you know what?
They didn't appear again all day to complain that they were bored!!!
at August 19, 2013