Bank Holiday Monday saw me attempting something I had never done before- a mini marathon.
Several weeks earlier my friend Martina had asked us to take part as a fundraiser for LARCC Cancer Centre in Mullingar, so how could one refuse? The fact that we could walk it was the selling point!
"10 k. That's not so bad", I thought. "I do a few kilometres every day at the moment. I'll just up it over the next month."
How time flies! The day was upon me and I had done even less walking than normal.
"I'll be fine."
Off we headed on the bus. 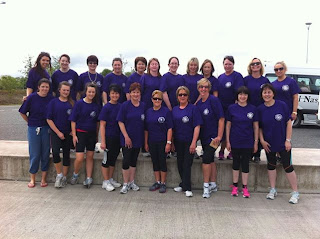 I must admit we are looking far fresher here than in any after photo.
Apart from my non-training, the other factor against me was the fact that it was a glorious sunny day in Dublin. Unheard of!
We took our places among the 40,000 other women (plus a few men in drag) and off we set. 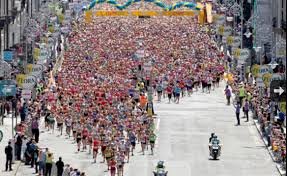 The atmosphere was fantastic. There were bands playing all along the route. So just as I was beginning to wain, the sound of the next band kept me going.
Before I knew it I was crossing the finishing line! 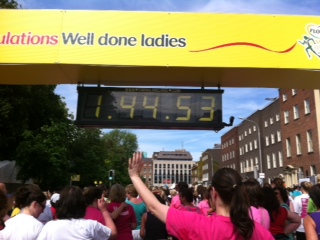 Okay, so it took me one hour and forty four minutes....while the winner did it in 34 minutes. But I bet she cheated and trained!
I proudly wore my medal. I haven't won one since I came first in the U14 slip jig! 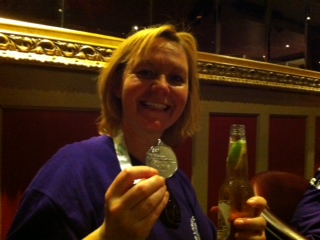 Ah, there's nothing like a marathon for working up a thirst!
Next year I'm going to actually train.
at June 04, 2013