In snails, I trust.

Was that it?
Was that glorious week at the end of May our summer of 2013? It better not have been. 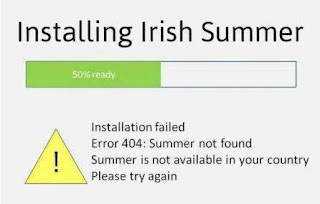 I was listening to a radio programme on the way home from school the other day and it was trying to explain why our weather forecasters get it so wrong so often. It seems that because of our little island's exposed position stuck out on the outskirts of Europe it is practically impossible to predict the weather far into the future as the systems are liable to change in the blink of an eye.
While computers may not be able to see what weather is ahead of us, nature has its ways.

A friend of mine was down in Killarney and got chatting to a jarvey. If anyone needs to know what the tourist season's weather is going to be like, he does. 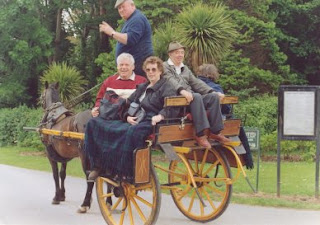 He announced that its going to be a scorcher of a summer! And how does he know this?
Because......
THE SNAILS ARE CLIMBING THE TREES!!!
Now if I saw that happening I'd think the snails were saying
Séamus, get the feck up this tree as fast as you can, there's a tsunami on the way.
But no, it seems that snails only climb trees to get into the shade before the sun beams down.
So you heard it here first. We're going to be basking in sunshine all summer. Woo-hoo!