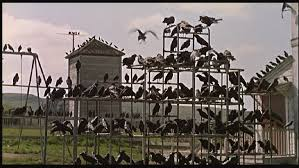 To my neighbours who saw me at 7.45am, clambering up a ladder and pinning a disposable glove to the eave of my house,
I CAN EXPLAIN!
15 minutes earlier.
I was in the sitting room, eating my breakfast while watching the morning news when I heard a sound that chilled the very blood in my veins. The sound of a bird.....a very close bird. I froze with the spoon mid-way to my mouth and listened again. Oh holy mother of God, it sounds like TWO birds and it seems to be coming from the kitchen.
Those who know me, are aware of my phobia about all things feathered. In fact those cursed birds don't even have to alive. My mother had to take the ornamental robins off the Christmas wreaths when I was a child as I couldn't stay in the same room as them.
The thought that a bird/birds had gotten into my house was churning my stomach.
However it had to be investigated.
Trying to prevent the bile that was rising to my mouth, I slowly opened the kitchen door.
Nothing. I paused. Suddenly the noise crescendoed. Where was it coming from? It seemed to be inside, but there was no intruder.

I opened the patio door and saw two birds fly out of the air vent that was leading into my kitchen. No wonder it sounded like it was coming from inside.
The little f******s were building a nest!!! Over my dead body!
My dad was an animal lover and he once built a house around a bird's nest to prevent the nestlings from dying,
http://www.nols-agirlforallseasons.com/2011/11/bird-in-hand.html
Sorry Dad, that ain't gonna to happen here. If the eggs had already been laid, then I couldn't have hurt them. I'd have had to move out til they had hatched and flown away. But I still had time. Nest was still under construction.
I surveyed the kitchen to see what I could use. I espied a disposable glove on the sink. Perfect.
So, dear neighbours, that explains why I was putting the flapping glove next to the air vent, in the hope that it would prevent the birds from returning.
But it doesn't explain why the mad woman was taking a photo of it! 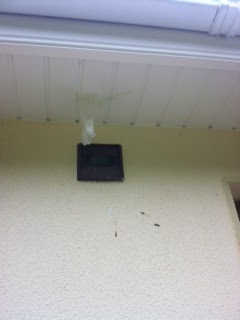