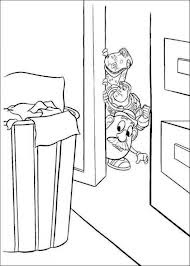 Ms. Smith* entered Ms. Jones'* classroom.
* names have been changed to spare someone's blushes!
Ms. Smith walked up behind her colleague who was standing at the whiteboard, with her back to the class.
"Excuse me, Teacher....."
She was interrupted by a piercing scream, as Ms. Jones jumped around in fright.
Of course the whole class collapsed in a fit of laughter at the sight of their teacher's panic-stricken face.

Later that day, Ms. Jones saw Ms. Smith disappearing into the computer room. Now I use the term very loosely as it is really a glorified cupboard with a computer, two chairs and a few shelves.
"Ah ha, payback time", smirked a revengeful Ms. Jones.
She waited a few moments and then quietly approached the door. She put her finger to her lips to shush a few giggling children who realised what she was up to.
Slowly she pulled down the handle, wrenched open the door and shouted
"BOO!"
She froze when she saw the shocked look on Ms.Smith's face who was sitting facing the door, in front of........the INSPECTOR!!!
Ms. Jones slammed the door shut before he could turn around, praying that he would think it was an unruly child!
He never mentioned it....but poor Ms. Smith had to sit for the next few minutes listening to him complement her class on how well behaved they were, while all the time trying not to explode laughing at her colleague's MASSIVE faux pax.
Ah yes, discipline is not an issue in our school, well at least not with the pupils. As for the teachers, that might be a different story!
at March 21, 2013