I blame the Iranians!

I try to learn one new skill every year. By the time I die I hope to have amassed a wide range of talents and hobbies.
One skill I learned at the tender age of 6 was Irish dancing. Now bear in mind, this was in the 1970's (just about!) and was pre-Riverdance. There was none of this shenanigans of moving your arms and looking all sexy! It was a case of painful ringlets embedded in your head and dancing like you've got a poker stuck up your a***!
Every now and again this skill is called into play. It usually takes place in a foreign land....and alcohol will probably have been consumed. The natives start it, by putting on a little floor show of one of their folk dances
In this case, the Turkish equivalent of "The Walls of Limerick"!
Once they hear our Irish brogue, they immediately clap their hands and shout "Riverdance"!
Suddenly the opening stains of the beating drums resound around the place, causing a surge of Irishness to pulse through your veins. And then before you know it, you're out on the floor, one-two-threeing like Flately.
This happened to me the other night. A group of onlooking Iranians obviously thought we were great craic because they invited us to a birthday party the following night. Always up for a new experience, we headed off.
Birthday parties are the same the world over. There's cake, a rousing rendition of "Happy Birthday" and alcohol...again.
Oops and it was Good Friday! Blame the Iranians.
It was then I tried something new.
Anyone who has met me knows that I can't/won't/refuse to sing out loud. I have had a very successful career in Musicals  by miming by way through many's a show. I teach music in school with the use of tape-recorder;Cd's; DVD; interactive whiteboards....depending on the decade. So I know you will all be amazed when I tell you that this year's new hobby is.....
IRANIAN KARAOKE! 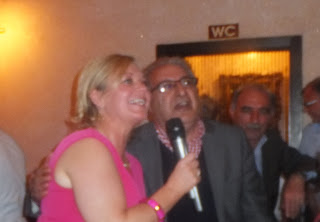 The fact that I didn't know either the air or the lyrics caused me to sing perfectly in tune.
Well that's how it sounded to me!
at March 30, 2013