I was reminded of this story today.
Flashback to my time in Abu Dhabi.
A friend of mine felt the dreaded tingle on her upper lip, the arrival of a cold sore. Before it could erupt she made a mad dash to the local pharmacy. She went up to the counter and displayed the offending bump on her lip.

The assistant glanced up at her and in monotone, shouted out at the top of her voice to her colleague at the back of the shop
MOHAMMED, HAVE YOU GOT THE CREAM FOR THE HERPES???
My friend's heart did a somersault in her chest. Bear in mind that the expat community there was quite small and everyone knew everyone else. She gave a furtive glance around to see if there was anyone else there.
If a rumour like that got around, she would have had to pop on the next plane home. Well, it would certainly have ruined her chance of ever getting a date!
at February 28, 2013 6 comments:

The Ultimate Girls' Day Out

My friend Helena and I decided to treat ourselves to a pamper day at a spa. We booked ourselves the "Ultimate Girls' Day Out" package in the Merriott Hotel. As we walked through the doors of the spa we were looking forward to all the delights that awaited us. Before we headed upstairs, we were stopped in our tracks by this sign.﻿ 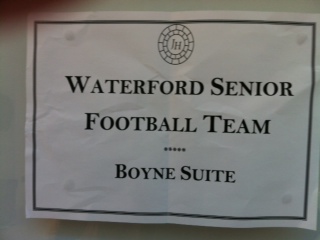 Hmm. That looks interesting.
As we glanced/peered in through the windows all we could see was a mass of broad, muscular shoulders.
"I wonder could you place a couch here, bring us a nice bottle of wine and two glasses and we'll just stay here and perve...."
Now that would be the ULTIMATE girls' day out in my book!!
However the staff were having none of it and forced us upstairs to have our facials and massages.
Spoilsports! 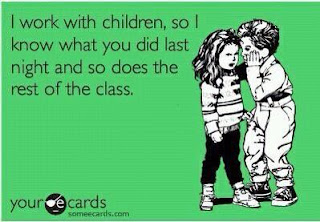 If parents knew the things that their Infant children tell their teachers, then they would not let them start school until they were at least 12. For every time that your child comes home from school and says
"Teacher said this", and "Teacher said that" they have also said in school
"Mammy said this" and "Daddy said that".
I had my first experience of this when I was on my very first teaching practise back in the last century.
Yes, it really was the last century, in the 1980's!
There I was, a culchie from the little village of Raharney, put into an inner city school where the 6 years olds were more streetwise that I would ever me.
On the third morning the children were comfortable enough with me to reveal all during Newstime.
"Miss", said a wide-eyed chap, "The guards came last night and took away all me Da's videos."
"Mmm, lovely. NEXT!"

A different Infant class a few years later presented me with this gem.
"Miss, Mammy came home last night and found Daddy in bed with our babysitter."
and even
"Miss, we had great fun at the weekend writing with Mammy's lipstick on the mirrors.....
Daddy is a B-A-S-T-A-R-D.
What does that spell?"
"Er,.......Bold Boy."

Oh my, how quickly they grow up. One minute they are quite happy to share their lunch off the floor with Sam, the family dog and the next they are all grown up and living in London..
Yes, today is Barry's milestone 30th birthday. 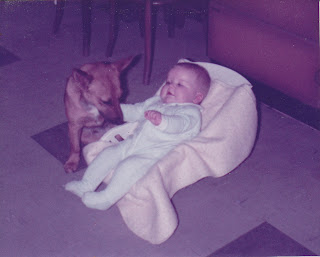 Oh wait, for those who don't know me, Barry is not my SON, he's my eldest NEPHEW. Phew, get that right! 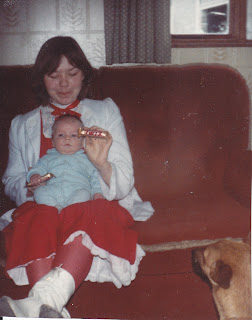 And once again, poor Sam waits anxiously for a crumb to fall his way.
Here he is ( Barry, that is, not Sam!), with all my other nieces and nephews helping me to celebrate one of my many milestone birthday. I'm not divulging which one!
﻿ 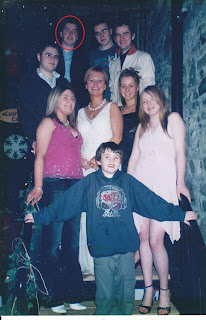 Sorry Barry that we can't be there to help you celebrate in person, but sure....the next time you're home!
Happy birthday Barry! 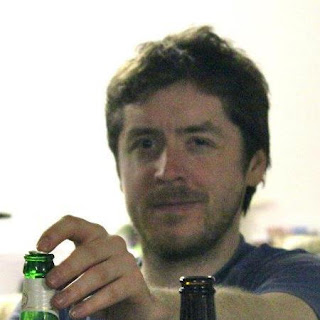 Spring in the Air

I woke up in good form this morning. I am on a week's mid-term break but unfortunately I am not flying away to far-flung countries. Instead I am on a "staycation".
It was "a soft morning, thank God".
Roughly translated as "It was drizzling rain,not enough to drench you but enough to dampen you".
I was halfway to Raharney when I was reminded of a poem I learned in 5th class, many, MANY years ago.
I wandered lonely as a cloud
That floats on high o'er vales and hills
When all at once I saw a crowd
A host of golden......
Hang on a minute, wrong flowers. 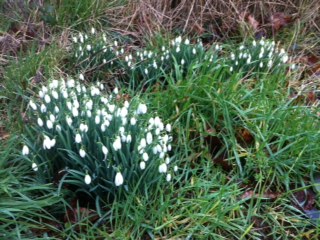 This is what I espied.

And that's my blog for today.
No witty anecdotes
No pearls of wisdom from my class
No flashbacks to extremely embarrashing moments.

Just a sight that raised my spirits and made me think
Do ya know wha'? Life is good.

Obviously today's Newstime was taken up with trying to explain to the class about Ireland's deal to defer paying back our HUMONGOUS loan to the European bank for forty years.
Puzzled faces.
"But Miss, does that not mean that it will be up to US to pay it back?"
"Yes"
By which time I will be either
a) retired to Turkey
or
b) Dead.

"But it this not just Enda Kenny saying I won't be Taoiseach then, so it won't worry me?"
"Exactly".
It never ceases to amaze me just how astute 12 year olds can be. 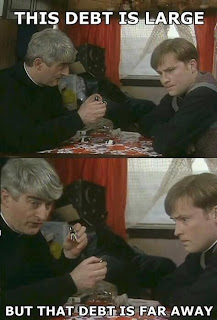 The things I do for charity!

Barnhall Rugby Club are going on a trip to Argentina. While there, they will take part in a project to teach deprived children to play rugby. They organised a Ladies Night to come up with the much needed funds. As one of our friend's sons is involved, how could we not??? 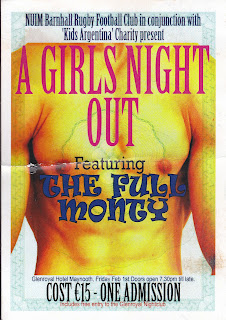 14 of us headed off to the GlenRoyal hotel in Maynooth. There were lots of pop up shops selling shoes, handbags, cupcakes and Ann Summers paraphernalia! The night opened with a fashion show.
Some nice dresses, but can I just say to whom it may concern
Models chewing gum is far too Tallifornia, ugh.
There was a Best-dressed competition, judged by non other than the current Mr. Ireland.
Never one to turn down a photo opportunity, he immediately photo bombed my moment! 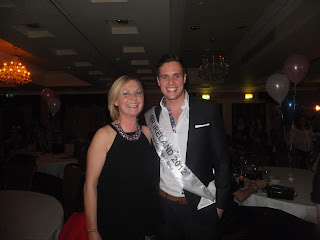 I didn't win....but in true sour grapes style, it's just as well, as first prize was one of the modeled dresses, which might have covered one of my legs.
But the highlight of the night was a one-night only performance of
The Full Monty!
Yes, far dues to a group of the lads, they bared all for a good cause.
And as for me, I felt it my moral obligation to cheer and whoop as loudly as I could.
The things I do for charity. I'm practically Mother Theresa!