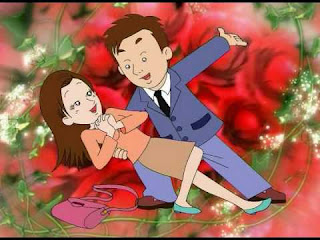 I do Drama classes with some younger children. We were sitting in our chairs watching an imaginary TV screen. As we "changed the channel" I called out
"Oh it's a comedy!"
"Now, it's a sad film."
"Oh no. It's a horror film."
and the kids reacted accordingly.
I called out
"It's a Love Story."
and there was the expected reactions. The girls smiled coyly at the screen while the boys pretended to gag! But one little chap was having an animated conversation with the telly, hands gesticulating in all directions. I wandered past him to hear what was going on.
"Whaddya like? She's cheating on ya! Get out fast!"
Ah bless. Romance, through the eyes of a 7 year old!
at November 15, 2012