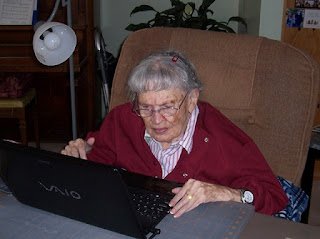 I was feeling a little intimidated as I had to attend a meeting with doctors, nurses, psychologists and suchlike. They were running a little late when I arrived at the clinic and invited me into the kitchen for some lunch. I thanked them but explained that I had just finished my lunch in school before I set out. There was a knock on the window and suddenly plates of salad, meat and freshly baked bread rolls appeared in from next door! It seems that this is the way they get their lunch every day.
Novel, to say the least.
Needless to say, I changed my mind and joined them. Well, it would have been rude not to!
Oh please God. Don't let them have an intellectual conversation over lunch. I can't cope!
I needn't have worried. Lunchtime banter started.
One of the doctors was recounting a story told to to him by a colleague.
It seems his mother, who was in her 70's had decided that it was time she entered the technological age. She purchased a laptop and was learning to send e-mails and google. Her son had set up a
Hot mail account for her.
One day he received a distraught phone call.
"GET HERE QUICK! Get these things off my computer." Wail.
"What's wrong mother? What happened?"
It seems that she got slightly confused about what to do and had typed "Hotmail" into google to open her account. Only spelling wasn't her strong point and she had in fact typed in
hotmale!!!
The photos that were downloaded were...em, interesting to say the least.
I hope this really happened but in my version, she actually knew full well what she was typing in!
Ah yes, 50 shades of Grey has a lot to answer for!
at October 20, 2012