There is a major drive on at the moment making sure that every TV in the country is ready for the big change over in October. Ah, isn't modern technology great!
On Sunday my sister Jacqueline invited all the family up to her house for dinner. Never ones to pass up a free feed that is handed to us, we all duly arrived on time. The weather was promised fine and 22 degrees, one of the best days this year after our washout of a summer, so hubby Michael was good enough to put up the gazebo at the front of the house for our convenience.
It's just a big tent, Michael! 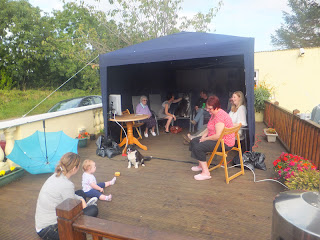 Actually looking at the photo, it reminds me a bit of  My Big Fat Gypsy Wedding!!!

The was one major  dilemma. The All Ireland Football Semi-Final was on between Dublin and Mayo. How were the sports fanatics supposed to see it?
Well, Michael being the technological sort of guy that he is, brought out a TV and set it up for our perusal.
"Eh, Michael. Why is the picture so fuzzy?"
"I think it must be snowing in Croke Park!"
"Isn't that gas, seeing that it's so sunny here, and we only down the road!"
"Ha ha very funny," retorted Michael as he twiddled and twisted cables in an effort to get a better reception.
Not one to be defeated, he eventually got a perfect picture. And what piece of modern technology did he use to achieve this? None other than........
A FECKIN' CLOTHES HANGER!!! 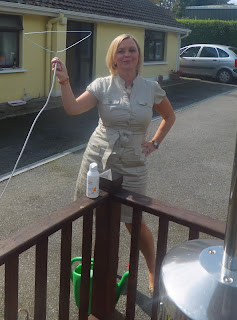