We were sitting in Foley's the other night when we heard an unmerciful smash of glass. There were the usual guffaws and wise cracks of
"Oops. Someone's dropped their contact lens."
But when we saw the waiters rush around in a panic, we realised that something serious had happened. One of the bartenders was bundled into a car, with serviettes wrapped around his hands, drenched in blood and off it sped.
We called over Mustafah to ask what had happened.
A glass had broken while the barman was cleaning it, cutting his hands in bits.
"God that's awful. Will he be all right?"
"No problem. He will be stitched and back here in 15 minutes."
"15 minutes? I doubt he'll be seen to in that short space of time."

It was 20 minutes later that he reappeared, all stitched and sorted. 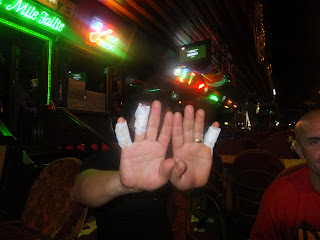 I couldn't believe it! I'm tellin' ya. If, God forbid, anything happens to me that I need hospitalisation, I'm going to fly over to Turkey for treatment. It'd be quicker than going to A&E in an Irish hospital!
at August 03, 2012