We were all ready for a night on the town. Make up on, hair done, high heels on feet. We left the apartment and pressed the button for the lift. Dawn was singing some song that had been on the CD player as we got ready. When the lift doors opened, she scared the shit out of the two sixteen year old lads that were already in it. We got in, very mutely and pressed the button for the ground floor.
On floor 3 the lift stopped. We waited for the door to open and for someone to enter. Nothing! I pressed the button for the ground floor......and nothing.
"Eh lads I think the lift is stuck."
I pressed the button to open the door but still nothing.
Okay, don't panic lads. I'm sure everything is alright.
The buttons were pressed again but there was nothing stirring.
Don't panic.
I pressed the phone button and there wasn't a geek out of it. Health and safety issues aren't really a big thing in this country. The sweat was beginning to appear on our foreheads whilst the two teenage lads lounged against the back wall as if this was the norm.
I pressed the alarm button. It rang  out loud and clear....for about two minutes and then it gave up the ghost and stopped. I pressed again. Nothing! And again. Still nothing.
Noeleen, you're the adult in this situation. Do something.
"Has anyone got a mobile?"
Emma whipped out hers. No signal.
We gestured to the two boys. Surely they had the most up to date phones. They must work. The lads shrugged their shoulders and continued to stare vacantly ahead of them.
I had a thought. For the  past two days, every time I got to the lift it had been at floor 5 (which was us) or floor 7.
"What floor are you on?" I asked the boys.
"7"
Fuck. I don't think there is anyone else in the block this week. No one is going to use the lift. We're doomed!
We found a button for a fan and at least a blast of cooler air began to circulate. Then I had a horrid scientific thought.
"Is that pumping in fresh air or is it just circulating the old carbon dioxide we've just breathed out?
Doomed, I tell you.
Modern technology, me arse. Nothing would work. So we started banging on the door. I didn't shout, as I've seen enough Die Hard movies to know that shouting uses up the available oxygen.
By this this the sweat was running in rivulets down the backs of our legs. It was about 38 degrees !The two lads were looking at us as if we were mad!
After what seemed like an hour, but may have been ten minutes, we heard a noise.
"Okay, I am here."
Thanks be to God!
It was Mustafah, the caretaker.
There was the noise of fumbling and scraping and a screwdriver appeared in the jam of the door and it was slowly prised open.
When it fully opened, we were halfway between the third and second floor. Short skirts and high heels aside, we jumped out giving Mustafah an eyeful of Tír na nÓg! We didn't care! 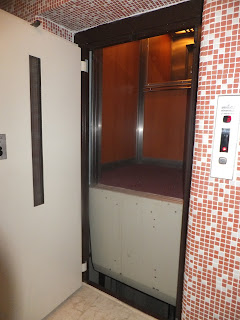 ﻿
We walked back up the stairs to our apartment to mop ourselves down.
Needless to say, I shall be using the stairs from now on! So if I have lost weight when I get home, you'll know why!
at July 15, 2012