It was this day six years ago that the bottom fell out of my world. My dad lost his battle against cancer and passed away.
The Catholic church may have many short comings but one thing that it has gotten right is how to deal with bereavement. There is the removal to the church, the funeral the next day, the month's mind mass and then the anniversary mass held every year. The presence of family, friends and community on these occasions gives huge support and comfort to the mourners.
This lack of ritual made it that bit harder on this day as I am thousands of miles away in Turkey. Don't get me wrong! I would just like to have been beamed home for this one day and then dropped promptly back tomorrow!
I went about my day as usual but I soon discovered that if you try to swim and cry at the same time you will probably drown.
My ingrained Catholicism demanded something more tangible to help me deal with the situation. But I didn't have the solice of visiting Dad's grave. So I took myself across the road to the local cemetery. 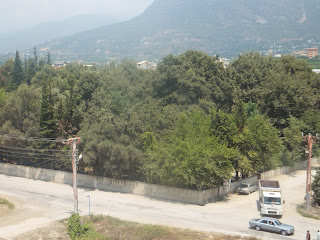 Going in through the gates was like entering Narnia through the back of the wardrobe. The dense trees formed a canopy that blocked out the blazing sun and muffled the sound of passing traffic. It was a cool and silent little haven.
The graves were spread out all higgidly-piggidly among the trees. I wandered around trying to decipher what was on the headstones. I eventually came across one that said Mehmet. Other squiggles looked like a 76. So I took it that Mehmet had the most in common with Dad and probably had left behind a wife, children and grandchildren that he had meant the world to.
I stood and I said a decade of the rosary for Mehmet. I wasn't being disrespectful as I know he would have been Muslim. But I figure a Dad is a Dad in any religion.
I then asked him if he wouldn't mind asking Mohamed to pass on a message to Jesus to let Dad know that I love him and miss him very much. 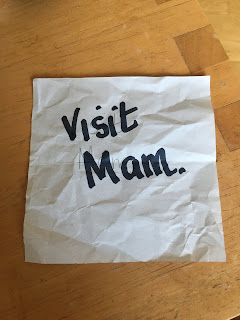