It was time for my annual pilgrimage to Turkey! I set off bright and breezy at the ungodly hour of 7:00am. 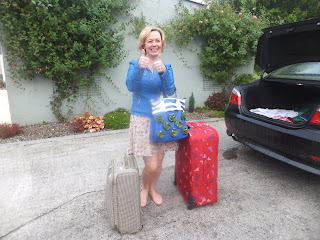 Marese drove me over to Kinnegad to catch the ShittyLink at 7:30, I mean CityLink bus to the airport. We sat in the car and chatted and waited....and waited....and waited. I didn't panic at first because its always a bit late. But 45 minutes later it was beyond a joke. Thank God for my brother, who came over to drive me to the airport. As he was putting the cases into the boot, he noticed a fella waiting with a case.
"Are you heading to the airport?"
"Supposed to be. But the CityLink bus hasn't arrived."
"Hop in. That's where we're going."
To say he was appreciative is an understatement!
We both arrived in time for our flights.
In the meantime Marese had rang CityLink to enquire as to what had happened to their bus. I had booked my ticket online the day before so would I get a refund? The guy on the other end of the line was adamant that the bus had arrived in Kinnegad at 7:33.
"No way. We were there at 7:20 and no CityLink bus arrived."
"I'm tracking it here and it definitely did."
"No it didn't. We would have noticed a big blue and yellow bus if it stopped."
Pause
"It wasn't one of our usual fleet. It was a white bus."
"And did it have CityLink written on it?"
"No."
"Loads of buses stop in Kinnegad. How were we supposed to know that this was a CityLink one?"
Heel of the hunt is that I will not get a refund as the bus DID stop in Kinnegad, despite the fact that it was an undercover one!
Thankfully that was the only hiccup on the journey.
As a single traveller, there is always the moment of dread before you discover who your travelling companion is going to be.
On the flight to Istanbul I was sitting beside a girl of about 16. She was part of a group from a secondary school who were going on a school tour. I was confused about this as schools are on holidays, until I realised that she had a Northern accent. They have shorter holidays than us in the Republic.
She had been separated from the rest of her group and put sitting beside me.
"I hope you don't mind. I'm sure you'd rather be with your friends."
"Not at all", she replied. "Knowing my luck I'd have been put sitting beside one of my teachers. How awful would that have been, having to be careful about what I said for four and a half hours?"
Silence
"And what do you work at yourself?" she continued.
"Em, I work in an office" I replied.
I didn't have the heart to ruin her flight.

I got my connecting flight in Istanbul and then onto Antalya. I had a taxi booked to bring me the last leg of the journey to Mamuthlar. When I came out of the airport there was the usual crowd waiting to collect people. I espied a man with a sign that read
NAULINE
I presume that's me! And even if its not, he'll do! I'm exhausted and I just want to get there....NOW!
He had very little English but we managed to work out that he was actually my taxi driver. One hour and 45 minutes later I was at my destination. It had taken a total of 15 hours from leaving my house to getting into the apartment! 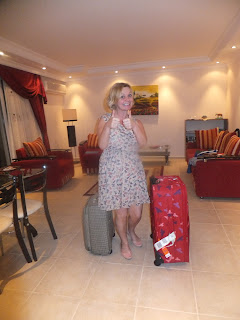