Jack of all trades. 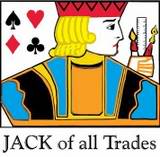 I noticed that I needed the bottle changed on the water cooler in the apartment. I met Mustafah, the caretaker as I was heading out for the night.
"No problem," he smiled "I will bring a new one in the morning."
When I got home later.....much later, that night/morning I then noticed a small puddle of water under the sink in the bathroom.
"I'll get Mustafah to fix that when he comes with the water in the morning."

At the ungodly hour of ten o'clock I was awakened from my slumbers by the incessant ringing of the doorbell.
"Groan. That must be Mustafah with the water."
I dragged myself to the door and opened it. It wasn't Mustafah, but another man with the water bottle. In he came and had it changed in seconds.
"Come here," I said, dragging him in the direction of the bathroom. I pointed out the leaking sink. He had a look and started talking in Turkish. As I don't understand the lingo and he hadn't a word of English, there was a lot of charades. I deciphered that he needed a screwdriver.
Wouldn't you think the caretaker or his assistant would carry around one with him?
He shrugged and went back to the kitchen. he returned with ...........a teaspoon!
Using McGyverlike skills, he twisted and turned the plughole and the leak stopped. I thanked him profusely, gave him 5 lira (approx. 2 euro) he thanked me profusely and I sent him on his merry way.

A while later, after my first cup of tea, I was hit by a bolt of reality.
WAIT A MINUTE!
That's WASN'T Mustafah's assistant! That was just some innocent guy from a shop that was sent to deliver water to an apartment. I have just hijacked him, armed him with a teaspoon and set him to fix the plumbing!
And what's more, he did it without batting an eyelid. What a difference to Ireland. How many times have you  tried to get something done , only to come up against a stone wall and someone saying
"Sorry Madam, that's not my department."
Another reason why I love Turkey!
at July 20, 2012