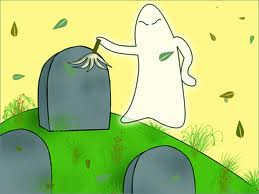 About four years ago I was bemoaning the fact that I never got a birthday card, christmas card or present from my Godfather. In fact I didn't even know who my godfather was! I asked Mam and she couldn't remember who stood for me.
Come off it Mum. You only had five kids, not dozens!
I went to my parish priest and asked him to look up the records. He rang me later that evening.
"Noeleen, I've looked up the Baptism records and your godfather is James Bollard."
"Who?" I paused. "Oh, you mean Sandy."
Sandy was my aunt's husband.
Unfortunately this week, Sandy passed away after a long illness. His funeral was held today.
As I walked away from the graveside, a quite attractive man fell into step with me.  There were the usual comments about the dreadful weather
It was raining....
and also about the reason we were attending this funeral.
I explained about my godfather, though I left out the bit about the lack of presents.
Then the man said
"I hope you don't think this inappropriate, but I couldn't help but admire you from a distance."
Wha??? I've heard about eyes meeting across a crowded room, but a crowded graveyard?
"Well, thanks very much," I managed to reply.
"So I'm wondering if you would like to meet up sometime."
Do you mean outside of the graveyard??
"I'm afraid I am heading away next week for a month, so I won't be around."
"If I could have your number, I could give you a call and maybe arrange something."
I then had the surreal experience of giving a man my phone number, while being obscured by a headstone!!!
Was that an inappropriate thing to do. What is the etiquette governing chatting up? I've never understood it at the best of times, but I'm pretty sure funerals were not one of the pick-up joints mentioned in "The Rules".
Later I was telling my cousins (Sandy's daughters) what had happened. It did manage to make them laugh in an emotional time.
"There you go. Daddy never gave you anything while he was alive. Maybe this is his way of making it up to you and getting you to shut up about it!"
Anyway, watch this space!
at July 06, 2012