Who is the fairest of them all?

I have just been to see Snow White and The Huntsman. I loved it. Of course if anything has something to do with the classics that are the fairy tales, then I am hooked.
The first thing that I was surprised at, was the number of very young children that were in the audience. It had a 12 rating, yet there were a number of six and seven year olds there. Granted they were there with their parents. But still. Its very obvious from the trailers that it is not the bluebird tweeting version that Disney put forward. So I wasn't at all surprised when, after the first couple of minutes sobbing children were withdrawn from the theatre!
Charlize Teron managed to achieve the impossible-she evoked sympathy for the most reviled villain in literature. I would like to say that when I played the part of the Wicked stepmother in Leixlip Musical and Variety Group's 2008 panto, I too brought another dimension to the character....but I'd be lying!!!
It was panto for God's sake. What do you expect???
I was playing the part of an older woman who was losing her looks and ripped apart with jealousy for younger beautiful competitor. I mean I had nothing to work with!!!
Having gone through my photos from that show I am amazed at the similarity between myself and Charlize. 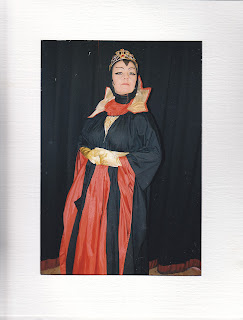 Practically separated at birth!
If that hasn't frightened the bejayus out of you, here is a clip of me in action
http://www.youtube.com/watch?v=r0OWtPOc_d8&feature=relmfu