Is this not the best excuse EVER?

My friend Anne had organised a BBQ for around 5 o'clock. At half four I found myself having to ring her.
Hi Anne.
Hi Noeleen. Are you on your way?
Eh, no. That's why I'm ringing. I won't get there this evening.
Ah. Why not?
I can't leave the house.
What's wrong.
She was imagining that I had been struck down suddenly with a dose of agoraphobia.
I can't close my front door or it will stick.
WHA????
Let me explain. I got up early to paint my door at 10am.
That's early for a Bank Holiday.
It said that it would dry in 5 hours. But 6 hours later it's nowhere near dry so I can't close my door. I can't leave or I'll be burgled.
Silence for a moment.
I accept your excuse. There is no way you could have made that up!

So to prove my story, here is the photographic evidence.
My door used to be fire-engine red. According to Chinese tradition a red door is said to bring love and wealth into your house. 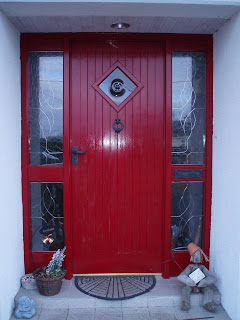 This time I went for Racing Green. Lets hope it lives up to its name. 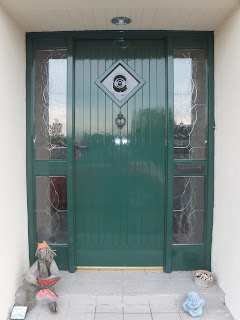 Mickey Joe is still sitting there but I must admit he looks the worst for wear. I refuse to get rid of him as he is of great sentimental value. I know it's odd to be emotionally attached to a block of wood that gives me nothing in return.
But several of my married friends know what I'm talking about!