Before I came over to KL I asked Ger if I should bring anything in particular. She said the aforementioned Tayto....and a toy for Cullan* their German shepherd.
*This is not a Twilight tribute. His real name is Cuchlainn, but Dave being British didn't go the whole mythological Irish Celtic hero thing, so it was shortened. He just gets his full title when he has done something bad.
That used to strike the fear of God in me when I was addressed by my full moniker by my mother.
When I arrived at their house Cullan went through my cases like a sniffer dog on Anything to Declare......and located the rubber chicken. He immediately imprinted* on me.
*This is a Twilight reference.

"It's not like love at first sight, really. It's more like... gravity moves.... suddenly. It's not the earth holding you here anymore, she does.... You become whatever she needs you to be, whether that's a protector, or a lover, or a friend."

Imprinting is the involuntary mechanism by which Quileuteshape-shifters find their soul-mates. 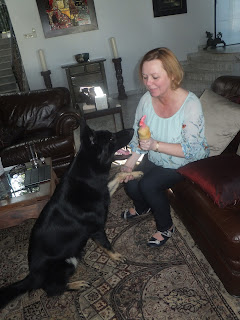 And so he now follows me everywhere, with a rubber chicken in his mouth He presumes that, seeing as I was the person who bought the damn chicken I should be the one to throw it. And so the game begins. He stands in front of me with the chicken in his mouth. I go to grab it, but he moves a few centimeters. This lasts a few minutes. Eventually I manage to grab it and we have a game of tug-of-war for a while. I get fed up and ignore him. He pus it in my lap. I throw it, he runs after it .....and the the whole process starts again. This can go on for AGES. I try to stop....but how could you ignore this pleading face for long. 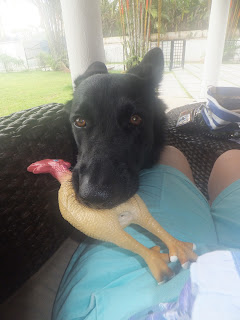 Sometimes the chicken ends up in the pool. But of course I can't cope with Cullan whining pitifully at it, so I end up having to stand up and walk over to fish it out. 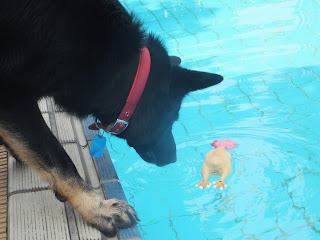 But enough is enough. This morning at stupid o'clock I was awoken by a loud panting noise at my ear.
Oh I hope that's not Dave. This could get awkward!!!
But it was Cullan standing over me expectantly, with the feckin chicken in his mouth!

All I'll say is
The chicken's days are numbered!
He won't be rescued today! 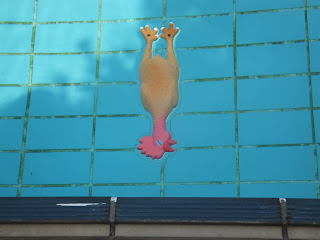