If a picture paints a thousand words...... 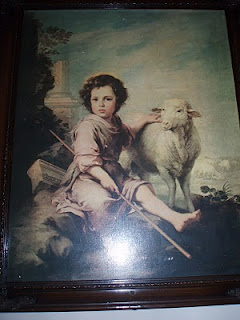 One night in Turkey Emma and I went to Murat's Place as they were having a Turkish night. After a particularly energetic dance routine  which I was dragged into, I headed off to the Ladies to freshen up. I went down a corridor, rounded a corner and then I was stopped in my tracks....by a painting.  Suddenly I was five years old again and in my Granny Lynam's bedroom.
That's where I had originally seen this painting (okay, so it's not an actual painting but a copy). That made no difference, it was still my childhood favourite.Granny Lynam told me that it was Jesus as a child and he was practising to be a shepherd for when he grew up.
Years later after Granny and Grandad died the house was boarded up and the painting was lost.
Now forty years later I was looking at an identical painting hanging outside a loo in Turkey.
If my handbag had been bigger I'd have taken it down and spirited it home.

This story came up again around the dinner table on Christmas Day.  Aunt Peggy burst my bubble when she told me that it actually wasn't in Granny's house but rather in the neighbour's sitting room. Where ever it had been hanging, I still loved it.

Today I went up to my mum's as Auntie Peggy was visiting. She handed me a large cardboard cylinder containing a rolled up canvas.
What followed was a story of serendipity.

A lady that worked with Peggy was telling her that when she had lived in Spain many, many years ago, she had visited the Museo del Prado and bought several copies of famous paintings which she brought home and promptly demoted to her attic where she forgot all about them. Now she was clearing them out as she figured that when she died, someone was going to dump them all anyway! Peggy mentioned the fact that she had a niece ie ME! who was particularly found of a painting. She didn't know the name of it but described it.  The next day the lady arrived in WITH MY PAINTING....well, a copy of it!