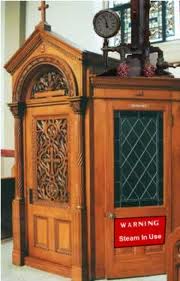 I wonder what the steam was for? To replicate the fires of Hell?
﻿
I remember my First Confessions well!  It wasn't anything as dramatic as Frank O'Connor's, but it is still etched in my memory.
We had to walk in twos, out the school gate, cross the road and into the church.  We lined up in our seats and awaited our turn.  Of course we had been warned that if we as much as moved a muscle we were in  SERIOUS TROUBLE. I was terrified of
a) doing something wrong
b) not remembering all my sins....hey, I had seven years of misspent youth to confess to
c) that damn dark and foreboding Confessional box.
We shuffled along the kneeler, each time the box opened my heart sank, as I knew I was one person nearer to going in.
It was my turn.
I closed the door behind me and was plunged into darkness. I could just about make out the outline of another kneeler in front of the little window.  But at seven years of age I was in a dilemma.
If I kneel, will I be too small to reach the window?  If I stand will I be too tall?  Do I have time to test it out?
I didn't.
The door was slammed open and I had to start.
"Bless me Father for I have sinned.  This is my First Confession..."
I launched into my sins
I was talking during Mass.
I was fighting with my brothers and sisters.
I said a bad word.
I didn't do what my Mammy told me.
The reason I remember them so well is that they are the exact same ones that I confessed every month for several years later.  I used to change the order as I thought the priest would remember them and give out to me for not having seen the error of my ways and cutting them out!

It's oh so different now....thank God!
Second Class got their First Confessions this week.  It's held in the evening and all parents and siblings attended to give moral support.  There are readings, prayers and songs followed by a cup of tea and a few ham sandwiches!  All a lot more child friendly.
The dreaded confessional box has been gotten rid of.  Instead the priest sits in a chair at the side of the altar and the child sits beside him to "tell the story of the time that they didn't show love."
Not a mention of the word SIN.
The kids were sitting in two rows waiting for their turn.  Soothing music was playing in the background to calm their nerves.
One of the little girls turned to the teacher, her eyes glowing with excitement, and whispered
"Miss, it's just like queuing up to see Santy!"