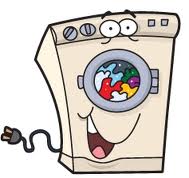 In science class today we were discussing simple machines and how they develop into more sophisticated ones over the years. We took the example of a washing machine and traced its history.
We then went on to predict what the washing machines of the future will be able to do.
"So if you were to develop a new washing machine, what other tasks would you make sure it could do, to make life easier for us?"
Most of the children decided that what was needed was a machine that would gather your clothes off the floor and actually put them into the machine for you.
"Very good class. That would be very useful."
"But Miss," said my smart Alec. "That's already been invented. It's called "Your mother"!
I know his mother well. She'd kill him if I told her what he said!!!
at November 10, 2011