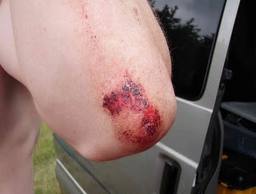 It was a crisp autumn day. I was walking around the school during breaktime as I was on yard duty. Two of the younger boys came racing towards me, in their shirt sleeves, oblivious to the cold. Despite the fact that I was muffled up in a scarf and coat, I stiil shivered on their behalf. I halted them in their tracks..
"What are you doing? Get back to your classroom and put on your sweaters."
Off they sped.
Two minutes later they were back, one of them sporting a bloodied elbow.
"What happened?" I enquired.
"I fell and scraped my elbow."
Eh doh! What does it look like?
I brought him in to doctor him up. As I wiped it and applied antisceptic, I couldn't resist the urge to give a mini-lecture.
"Now if you had been wearing your sweater like I said, then you wouldn't have scraped your elbow so badly."
Two big innocent eyes stared up at me.
"But Miss, I was running back into my classroom to get my sweater, like you told me, when I fell!"
What? Who? When? I didn't say that! It's not my fault!
at November 12, 2011