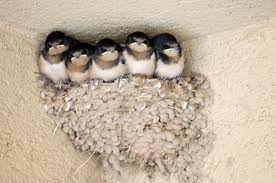 The topic in Religion today was St.Kevin. The story goes that St Kevin stood in the lake up to his waist, arms outstretched, reciting the psalms. One day a blackbird started to build a nest in one of his hands. Being very fond of nature, St Kevin didn't move until the nest was built, eggs were laid and hatched, fledglings had flown away.
Phew! He must have had some biceps after that.
This was too far-fetched for the class to believe. So I told them this true story involving my Dad.
Dad was also an animal lover, and this included birds.
I obviously didn't take after him as regards the birds!
He was building a house and had the walls up. He came back to it after a weekend to discover that a bird had started to build her nest in the house. Dad refused to destroy the nest and proceeded
to build the house around it!
He left an opening in the wall for the mother bird to fly in and out, the eggs hatched and a few weeks later the fledglings flew away. Only then did Dad fill in the gap.
The kids were dumbfounded at this story.
"So Miss, your dad was a kind of saint?"
He sure was!
at November 22, 2011

Taking it to the limit 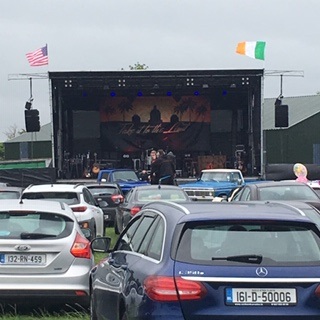